Heatwave Has Claimed 11,000 Deaths in Moscow So Far 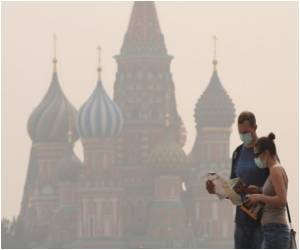 Moscow registered nearly 11,000 deaths due to an unprecedented heatwave this summer, a city official told AFP Friday, as the mortality rate more than doubled in the Russian capital.

In August alone, 15,016 deaths were registered in the city of more than 10 million people, compared with 8,905 for the same period last year -- an increase of 6,111 deaths, city official Evegenya Smirnova told AFP.

The month earlier, Moscow saw 4,824 deaths more compared with the same period in July 2009, she said by telephone.


Overall, the city experienced 10,935 deaths linked to the extreme temperatures and stifling smog over the two months from July to August, which represents a 60 percent rise in the mortality rate.
Advertisement
The Russian authorities have faced searing criticism for downplaying the health risks amid the country's worst ever heatwave when a toxic mix of smog and smoke from nearby wildfires engulfed the city.

The health ministry only acknowledged on August 30 that the country had seen a surge in deaths in the affected regions -- up by 50 percent in Moscow in July -- despite media reports this summer describing morgues overflowing.

Federal authorities had earlier refused to give details of the Moscow death toll and there was no public announcement of the figures on Friday.

The authorities have partially attributed the rise in deaths to a spike in the number of drownings as Russians rushed to escape the sweltering temperatures topping 40 degrees Celsius (104 Farenheit) over several weeks.

Officials say it may take months for the government to tally the damage from the disaster that destroyed over a quarter of Russia's grain harvest, but several economists have put the cost to the economy this year at roughly 7-15 billion dollars.

Glossary for Heat Stroke
Glossary section of medindia gives meaning to some of the medical terms related to Heat Stroke....