Heat is Recycled from the Sewer In Austria 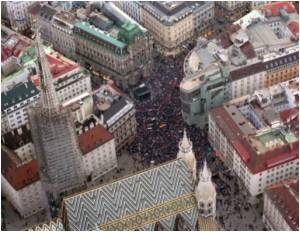 Huge amount of hot water from household appliances, factories and businesses gurgle down the drain every day, wasting not only H2O but also another precious resource: heat energy.

Not, however, in the Austrian town of Amstetten, where a pilot project by the local utility company is "recycling" this energy from a place where normally few dare to tread -- the sewer.

This it uses to heat 4,000 square metres (45,000 square feet) of buildings, or cool them in summer, allowing it to dispense entirely with gas and reduce its carbon footprint.


"Almost every week we get a visit from a different delegation coming to look," Robert Simmer, the enthusiastic boss of Stadtwerke Amstetten, told AFP as he showed off the project.
Advertisement
"There is a French delegation coming next week, and then a Spanish one ... We are starting to lack the resources, we need to beef up our personnel to handle all the tours we have to do."

Along a 42-metre (yard) stretch of sewer where the water temperature can reach 27 C (81 F), the firm has put in place a high-tech installation.

Water running in pipes adjacent to -- but separated from -- the sewer is warmed by devices called heat exchangers that "suck" the warmth out.

This warmed water is then pumped to the nearby headquarters where a highly efficient heat pump fires the central heating system.

"The water that is pumped over here is clean, there is no fecal matter. The equipment inside (the sewer) is also self-cleaning," Simmer said.

Even though extra electricity for the heat pump -- devices also used in fridges and freezers -- costs the firm 6,500 euros ($8,850) per year, the savings are substantial compared to what it used to spend on gas.

"We have invested 240,000 euros," Simmer said. "This should be recouped within around 11 years. With any other renewable energy source like solar power, it wouldn't be any sooner."

Amstetten's utility firm is lucky because a nearby paper factory pumps hot water into the sewer, making it warmer than normal.

In addition, the firm uses under-floor heating, which is more efficient than radiators on the walls.

But even in places without such advantages, the potential for the technology is substantial, said Florian Kretschmer from Vienna's University of Natural Resources and Life Sciences (BOKU).

"The advantage from this technology is that you have a very regional resource, and waste water is always present," Kretschmer told AFP.

Other similar projects exist in Germany, and Austria's Alpine neighbour Switzerland is particularly advanced, with more than 200, and the potential is considerable, he said.

A study done by the BOKU and others estimates that between three and five percent of buildings in Austria could be heated using this technology, with larger buildings such as schools or office blocks particularly well-suited.

This doesn't sound a lot, Kretschmer admits, but combined with other "clean" technologies like solar and wind power, it can play a role in weaning Europe off fossil fuels.

"Of course this alone is not going to solve the world's energy problems," Kretschmer said. "But what we need in the future is a good mix (of ways to produce power), and energy from waste water can play a part in this."

One potential downside is the temperature of the sewer water might fall to such an extent that it would affect sewage treatment plants. But this would only happen if the technology was used on a very large scale.

As a result, the BOKU is investigating the possibility of extracting heat from cleaned water downstream of treatment plans.

"In fact that would even be positive, because it will cool the water a bit before it flows into rivers," Kretschmer said.

Source: AFP
Advertisement
<< Take Care of Your Hair All Year Round
Thousands of British Soldiers Found to be Overweight >>

Austrian Womans Nude "Sun Bathing" Leads to Traffic Jam
An Austrian woman managed to literally stop the traffic after her decision to sun bathe in the nude ...

Live Your Dream of Swimming in a Pool of Beer in Austria
Starkenberger Castle in Austria has 7 pools to offer, all of which are filled with beer...