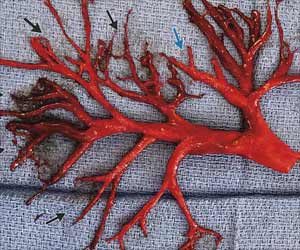 A 36-year old man admitted to the hospital for heart failure on December 3 coughed up a 6-inch wide blood clot that is a perfect replica of his right lung. He later died after a week due to complications.

During an extreme bout of coughing, the patient expectorated an intact cast of the right bronchial tree.This is not the first time any patient has coughed up something unusual. Similar cases like these have happened before. A 34-year old woman suffering from laryngeal diphtheria produced a similar cast of her trachea in 1926. In 2005, a pregnant woman coughed up another bronchi-shaped blood clot. She later recovered and delivered a healthy baby. But, what makes it special in the recent incident, is its massive size and intactness. The blood clot emerged perfectly intact into a 6-inch wide gross shaped structure.

Advertisement
‘The massive-sized blood clot may have been caused due to an infection that had led to an increased concentration of fibrinogen. Fibrinogen is known to harden the clot, keeping it intact without breaking.’

Georg Wieselthaler, M.D., a transplant and pulmonary surgeon at the University of Florida at San Francisco, and his team traced the patient's airway passages and identified the origin of the clot to be his right bronchial tree. "It's a curiosity you can't imagine  I mean, this is very, very, very rare," says Wieselthaler.


Reasons behind the gross blood clot

In a healthy human body, bronchi in lungs is the abode of gases we breathe in and expel, viz., oxygen and carbondioxide. They branch into smaller bronchioles that bears alveoli, the place where the blood stream drops in carbondioxide and picks up oxygen.
Advertisement
In the case of this patient, there's much more than air in the bronchi. The doctors fixed a ventricular assist device called impella, into the patient, which helps maintain blood flow. But, the device is known to cause clots in blood, so the doctors gave him an anticoagulant. But the flip-side is, the anticoagulant can prevent coagulation of blood and healing when any tissue gets fissured or broken. In this case, the patient's blood entered his right bronchial tree, leaving him coughing small clots of blood for many days.

The doctors guess an infection in the patient had caused an increased secretion of fibrinogen, which acts as a 'glue' and provided the hardiness that kept the clot intact. Gavitt Woodard, M.D., a clinical fellow at UCSF said "Because it was so large, he was able to generate enough force from an entire right side of his thorax to push this up and out."

The doctors reported that coughing it up provided him with some relief at the moment. But, ultimately the patient did'nt recover.

Blood Clots
An abnormal blood clot forms when there is damage to the lining of an artery or stagnation of blood ...

Common Side Effects of Anticoagulants / Blood Thinners
The main side effect of anticoagulants or blood thinners is bleeding. Others include reduced ......

Pulmonary Embolism
Pulmonary embolism (PE) is a complication that results from a block in the main artery supplying the...