'Healthy' Flavoured Water Contains As Much Sugar As 3 Doughnuts 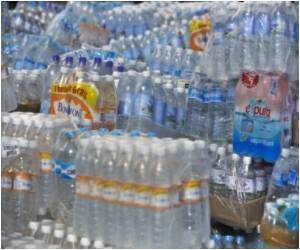 A drink that has been parading as healthy flavoured water actually contains as much sugar as a plate of Krispy Kreme doughnuts.

The most popular brand, Volvic's Touch of Fruit in lemon and lime, has 27.5g of sugar in its standard 500ml bottle - equivalent to almost seven teaspoons.

The drink is supposed to be our answer to drinking eight glasses of water but drinking one bottle gives an adult a third of their recommended daily intake of sugar and is equal to eating three powdered blueberry-filled Krispy Kreme doughnuts, which each contain 9g of sugar.


The drink, which promises 'tasty hydration', contains even more sugar than a Kit Kat bar, which has 22g.

Drench, which was launched last year by Britvic and invites customers to 'improve alertness', has more than 40.48g of sugar in a 440ml bottle of its blackcurrant and apple flavour drink - equivalent to 46g per 500ml.

Those teens whose diet includes high amount of sugary drinks and carbohydrates must watch out for increased risk of heart disease as adults.
Advertisement
And This Water - part of the Innocent drinks company - offers drinks containing as much as 50g of sugar per 500ml, equivalent to five and a half Krispy Kreme doughnuts.

Coca-Cola's adverts describing their Vitamin Water as 'nutritious' were also dropped last month because each bottle contains up to 30g of sugar, equivalent to five teaspoons.

A Volvic spokesman said the brand had launched a sugar-free range of flavoured waters and that their bottles were also clearly labelled with the sugar content of the drink.

Tam Fry, from the National Obesity Forum, said flavoured water could lead to tooth decay and weight gain and should not be given to children.

"To pretend that sweetened water is as healthy as tap water is plain ridiculous. Certainly the only water children should be drinking is tap water, and if adults want to drink sweetened water, they must be aware it is full of sugar so they can burn it off with exercise," the Daily Mail quoted him as saying.

"We are seeing children raised on sweetened drinks having their teeth extracted at age three, and it's pernicious."

Water Matters: Why You Need to Drink Enough Water Everyday
News Archive
News Resource
Advertisement
News Category
Milestone In Voluntary Blood Donation Achieved Samsung Reinvents Toilet for the Poor Which is a Better Form of Exercise: Daily or Weekly? First Phase of Foot-and-Mouth Disease Vaccination Shocking News: Polio Cases Return After a Decade in the US
More News
Sign up for Wellness Consult a Doctor Sign up for Selfcare

More News on:
Sugar: Time to Look beyond Its Sweetness Water - Nutrient that Beats the Heat Tips for Healthy Fasting During Ramadhan Water Matters: Why You Need to Drink Enough Water Everyday

Accident and Trauma Care Loram (2 mg) (Lorazepam) Diaphragmatic Hernia Hearing Loss Calculator Selfie Addiction Calculator A-Z Drug Brands in India The Essence of Yoga Blood Donation - Recipients Nutam (400mg) (Piracetam) Drug - Food Interactions
This site uses cookies to deliver our services. By using our site, you acknowledge that you have read and understand our Cookie Policy, Privacy Policy, and our Terms of Use