The World Suicide Prevention Day is celebrated on the 10th of September every year by the International Association for Suicide Prevention (IASP) and is endorsed by the World Health Organization (WHO). The IASP works towards suicide prevention as well as educating the general public and mental health workers on suicide prevention. The theme this year is 'Take a Minute, Change a Life'.

Suicide is not as rare as one may think. Around 800,000 people commit suicide every year all over the world. Around 25 times this number attempt suicide. Suicides may be due to emotional problems, financial difficulties, professional issues, or anything that causes despair and appears to be impossible to overcome at the particular moment. The intake of alcohol or illicit drugs only worsen the situation, making it difficult for the person to think clearly and take a rational decision.
World Suicide Prevention Day 2017: Take a Minute, Change a Life


The Blue Whale game has exposed the unknown dangers of the online world. Young individuals participating in the game commit suicide as a final task. Youngsters often go through turbulent times and love experimentation. They may start playing the game out of curiosity and end up taking their lives! Early detection of danger signs could help to save the lives of several youngsters who have fallen prey to the game.


‘The World Suicide Prevention Day is celebrated on the 10th of September every year. The theme this year is Take a Minute, Change a Life’


Many people who had attempted suicide in the past have described their feelings going up to the suicide, and their earnest wish that someone would prevent them from doing so. People who commit suicide do wish for an alternative, but take the step out of complete desperation. This is in contrast to the myth that people who wish to commit suicide will not turn back.

The theme for this year's World Suicide Prevention Day is 'Take a Minute, Change a Life'. With this theme, members of the community are urged to reach out to those who need their help and spend some time listening to them. People who live alone in a community are extremely vulnerable. There is a high chance that the simple step could defer someone from taking the ultimate step.

Some of those who attempt suicide, do not live in isolation - they are a part of a family and a network of friends, often on social media. And yet, they are alone in the crowd since no one has time to sit and talk to them and find out what they are going through. We, as responsible members of the community, should make sure that we spare some time to be with them and help them out of their problems.

If someone drops a word on their wish to commit suicide, expresses a feeling of hopelessness with nothing to look forward to, appears withdrawn or gives some other indication of a possible suicide attempt, do not ignore it even if it appears to be a joke. It could be a veiled plea for help! You may feel apprehensive about intruding in another person's life, especially if you do not know the person well. But the fact that you have shown concern could be the turning point in the person's life.

You may not know what to say to a person thinking of suicide, or may be afraid that you may say the wrong thing. The fact is, quite often, you do not need to say anything - the other person mainly needs someone to listen to what he/she is going through. It is important not to be judgmental during the interaction, but make the person feel comfortable enough to say what he/she wishes to. You could always later take the person to someone else who is more qualified to help. If you wish to be more equipped with helping people who may be thinking of a suicide, there are many online resources that will empower you to help the individual at least initially.

The IASP has organized the Cycle Around the Globe campaign to increase the awareness about suicide. As a member of the community, you could take part in it and pledge to take a minute to reach out to someone who may need you!

If you suffer from suicidal thoughts, it does not mean that there is something wrong with you. It only means that you are undergoing extreme stress,and you are unable to cope with all on your own. Every tough time passes, and thinking of suicide could prevent you from living a better life in the future. Every problem comes with a solution; it is only when you despair that you cannot see the answer in front of you. With the right type of help at the right time, you could put the dark times aside and live on to fulfill not only your dreams, but also of those around you.

If you are suffering from a condition like depression, you could feel that everything around you is not going as per your wishes. Depression is a treatable condition, and once your mind starts working in the right direction, you will find there is much to be happy about.

Several suicide survivors today work to prevent suicide. If they could pass through the tough times and be happy today, so can you! You should not be alone during the times when you are feeing down, it does not matter to whom you reach out to - it could be someone you are close to, or someone who is unknown to you like a mental health counselor or a volunteer. Helplines and online chats are available to help you out of the situation.

Once the crisis passes away, it is important to take steps to make sure that it does not recur. Avoid being alone. Take time out to meet your friends and family. Though work is important, make sure that you also spend time doing things that you enjoy. Spend time outdoors. Take time to achieve your personal goals, things that will give you a sense of fulfillment. Regular exercise will not only keep you fit, but also improve your mood. A healthy diet and adequate sleep at night will also keep you healthy and happy.

If you go into thoughts that are likely to depress you, thinking of the same things again will reinforce the thoughts. Break the cycle by thinking or doing something else that is pleasant.

A suicide is a permanent step with no turning back. Therefore, if you suffer from suicidal thoughts, give others a chance to help you out of it, support you and help you to lead a wonderful life that you could be missing!

Learning Disabilities Associated With Suicide Attempt
Suicide attempts was much higher for women who had been diagnosed with learning disabilities (16.6%) compared to women who had not (3.3%) a new study by the University of Toronto had found.
READ MORE 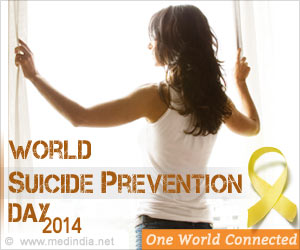