What is Rare Disease Day?


Children and adults affected with rare diseases often struggle with a long diagnostic odyssey which may vary from 1-8 years. In India, it takes almost 8 years to get an accurate diagnostic of a rare disease. Fifty percent of the affected children do not live beyond the age of 5. Hundred percent of the treatment expenses are borne out-of-pocket.


‘World Rare Diseases Day is a platform to raise awareness about rare diseases among the general public, clinicians, pharma and biotech, policy makers and governments across the world. There is a need to address the issue of proliferating rare diseases and the issues regarding access to healthcare and outcomes.’


Even globally, clinical knowledge of rare diseases is dismal compared to other infectious and chronic disorders. Health systems are ill-equipped to deal with the complexities of rare diseases and often treatment and drugs are expensive and unaffordable to most families. In such a scenario, it is important to raise awareness for access, equity, improved treatment, drug discovery and research to ensure that sections of our population are not left out of healthcare. Health is a fundamental right of every citizen in the world and no group should be left languishing without proper access to healthcare.


Why is Rare Disease Day Important for India?

Rare disease treatment has fallen through the cracks of the Indian public health system. Indian health insurance companies do not cover rare disease treatment or hospitalization quoting the "pre-existing clause." None of the health policies across the state have any reference to rare/genetic disorders. Currently, a "skewed" national policy for the treatment of rare diseases was released in 2017. India needs a holistic rare disease policy with a robust orphan drug act. India also clearly lacks concrete epidemiological data on rare diseases. There are very few accurate disease registries. This creates a significant gap in determining the disease burden. Given India's population, it is important to get an accurate estimate of the number of people suffering from rare/ genetic disorders in order to be able to put in place prevention programmes.

In this scenario, Rare Disease Day is a significant platform for making the public as well as health sector, government and agencies aware about its myriad complexities and need for redressal.

The theme for Global Rare Disease Day since 2017 has been "Research." Research is very important for rare diseases since less than five percent of these diseases have a cure or even a drug. Research can accelerate the search for therapeutics, push for robust drug discovery and ultimately find final curatives for rare diseases. Research is the first step in the long pipeline towards drug discovery and curatives. Currently, a good number of biotech labs and companies interested in rare disease drugs and therapeutics have been making headway towards this goal. For example, Sarepta Therapeutics has received FDA clearance for Micro-Dystrophin Gene Therapy Program for the Treatment of Duchenne Muscular Dystrophy in 2017. Similarly, Spinraza (Nusinersen) by Biogen has become the first FDA approved drug (2016) for treating the rare neuromuscular disorder, spinal muscular atrophy (SMA). Endari (L-glutamine oral powder) was the first FDA approved drug by Emmaus Medical for treating sickle cell pediatric and adult patients.

India has been lagging behind in efforts to promote and engage in deep research for rare diseases. Since the disease is "rare" it is seen as just a small problem affecting a minority. Neither researchers nor government and agencies see this as a problem in the public health system. Hence, funds available for basic scientific research which can be translated into drugs and therapeutics are few and far between. The goal of Universal Health Care is "health for all" and we cannot be oblivious to the plight of rare disease patients and families. Researching rare genetic disorders will also lead to treatment for all common disorders. Ex: research on inborn metabolic error Alkaptonuria also led to several drugs for rheumatoid arthritis; researchers working on rare kidney disorder Focal Segmental Glomerulosclerosis (FSGS) also cracked the disease pathway for chronic kidney diseases thereby accelerating the search for a cure. No country can afford to let genetic disorders proliferate in the interest of community health.

Rare Disease Day this year will involve several conferences, symposiums and research roundtables in line with the theme of "research" to encourage and motivate more medical and translational research for cures. Rare Disease Day 2018 hopes that patient communities will proactively take a role in research, set the goals and agenda and organize research. It is vital for patients to get involved in research which can then translate into practical drugs and cures. Rare disease patient communities across the world have always engaged with researchers to accelerate research. Currently in India there are rare disease communities which have been organizing and taking an active role in research. For example, the Dystrophy Annihilation Trust (DART) is entirely led by parents of boys with Duchenne Muscular Dystrophy (DMD). Started by a parent Ravdeep Anand, DART has developed its own research lab and is currently on the verge of starting clinical research with patients for exon skipping which will enable patients to produce a certain quantity of the missing protein "dystrophin." DART has been at the forefront of advocacy and activism pushing better regulatory laws for clinical trials and research. It is this exemplar that all rare disease patient communities need to follow in India to take an active role in research and cures.

World Rare Disease Day 2017
The 10th annual Global Rare Disease Day is being celebrated each year on the last day of February. This year it is found to focus on the key theme being "Research."
READ MORE 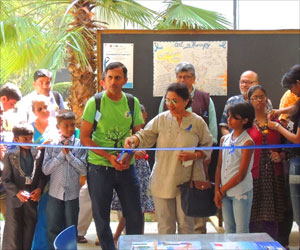 Blue Ribbon Rare Disease Symposium, Film Festival and Art Camp 2017
The Blue Ribbon is a platform created to focus on topics related to rare diseases, to improve quality of life of those living with a rare disease.
READ MORE