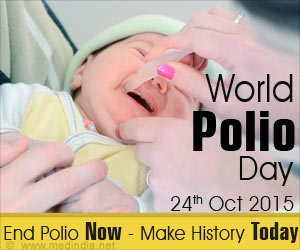 October 24th is marked as the World Polio Day to create awareness about polio disease and several efforts taken by world nations in eradicating it effectively around the world. Polio is considered to be one of the most devastating and fatal diseases of the world. It is caused by the wild poliomyelitis virus and mainly affects children under five years of age. There is no cure for polio. Polio prevention is through immunization.

The wild poliovirus (WPV) has three serotypes namely type 1, type 2 and type 3. Type -2 has been completely eradicated and type 1 & 3 still exist in endemic areas. Type 1 is most devastating than type 3 and both cause lifelong paralysis.


Poliomyelitis or Polio is an infectious disease and transmission takes place through feces and in environments that lack proper hygiene and sanitation. 90% of people infected with the disease do not show any symptoms. Therefore, even a single confirmed polio case is being considered as a potential threat as it can spread the disease to thousands.

Polio was considered to be a deadly disease in the 20th century wherein 1000 children were paralyzed every day. Globally, polio has been eradicated through effective immunization programs conducted by many organizations like the World Health Organization (WHO), UNICEF, Rotary International, U.S. Center for Disease Control and Prevention and the Bill & Melinda Gates Foundation.

So far the program has achieved 99.9% eradication and has reduced the number of polio endemic countries from 125 to 3. At present, the number of children paralyzed by polio each day has been reduced from 1000 to 1.

Polio is the second human communicable disease next to smallpox though polio in most countries has been eradicated, Pakistan and Afghanistan are the only two polio-endemic countries existing still. Pakistan is aiming at polio eradication by 2016, reveal sources.

Afghanistan: Though most of the country is polio-free, still the Southern Region of Afghanistan and Farah province in the Western Region remain polio-endemic. 85 % of cases were reported from these regions in 2011. Lack of proper immunization and poor accessibility to communicate about polio eradication tend to be the reason for the failure of complete eradication.

Pakistan: There was no interrupted transmission of polio in the country and Federally Administered Tribal Areas (FATA) remain most endemic to the disease. The most recent case was reported on 16 September in Peshawar. The total number of WPV1 cases for 2015 is 38, compared to 205 at this time last year.

India: In January 2014, India was declared Polio-Free, which the Rotary International claims as the biggest challenge they faced so far in eradicating it. They said that "India's success proves polio can be stopped in even the most challenging conditions."

Nigeria: On September 25, 2015, Nigeria was declared polio-free by the WHO, with no cases reported since July 2014. Around 45 million children were continuously immunized under the global polio eradication initiative to ensure that no child suffers from this disease. GPEI claimed this as a 'historic achievement' in the global health sector.

Emergence of Circulating Vaccine-Derived Poliovirus (cVDPV): Vaccine-derived polioviruses (VDPVs) are rare strains of poliovirus that have been genetically mutated from the strain of the oral polio vaccine. If a population is under-immunized, there are chances of these viral strains circulating and spreading the disease again. Countries like Madagascar, Guinea and Ukraine are under this category. Infections through this type of virus are less but the eradication is similar to that of the wild virus type.

This long-term strategy aims to create a polio-free world by 2018. It has four main objectives namely:
According to the GPEI, 10 billion doses of Oral Polio Vaccine have been administered to nearly 3 billion children worldwide since 2000 and around 13 million cases of polio have been prevented. The reduction rate of the disease is more than 99%.

Currently, the GPEI is focused on eliminating Polio from two endemic countries, Pakistan and Afghanistan to make the dream of a Polio-free world achievable.


Why Should We End Polio Now?

Since only two more countries are endemic for this disease, eradication tends to be achievable. If polio is not eradicated now, then it is estimated that the disease will rebound to 10 million cases in next 40 years. As well as, the infrastructure for polio immunization also strengthens the systems for other health interventions.

Complete eradication of polio does not guarantee a safer polio-free world because there are high chances of recurrence. Therefore GPEI has dedicated itself to conduct these researches for long-term monitoring of poliomyelitis/polio vaccines and virus. It includes,

The main drawbacks for complete eradication of polio involve lack of proper awareness on polio vaccination and also about educating people on routine vaccinations to curb this disease. So on this World Polio Day, we can contribute our part to make the world polio-free by taking these small steps,
References : 1. http://www.endpolio.org/

Poliomyelitis Poliovirus
There are 3 subtypes of poliovirus, P1, P2 and P3. These are transmitted through the fecal-oral route.
READ MORE

World Polio Day 2014 - Risk of the Deadly Disease Still Persists
World Polio Day, observed annually on 24th October, is a day to raise awareness on 'polio' and a reminder of our monumental victory over polio.
READ MORE

World Polio Day - Stop Polio Forever
Global polio eradication programs have significantly cut the incidence of the disease, yet it is an apt time to take stock of what remains to be done to 'Stop Polio Forever'.
READ MORE

World Polio Day
Polio or Poliomyelitis is an infectious viral disease, which affects the nervous system. Children below the age of five years are more susceptible.
READ MORE