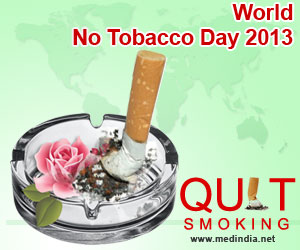 World No Tobacco Day (WNTD) is, a WHO initiative, observed all over the world as a 24- hour abstinence from all forms of tobacco.

There are 5.4 million deaths caused by tobacco, annually, of which 600,000 are passive smokers. WNTD was created to draw attention to the negative effects of tobacco and to the destruction it sows around.

Although WNTD has been generally accepted with lots of enthusiasm across the globe, it has also met with resistance from the tobacco industry.


Tobacco smoking is popular among the young and also among those who are keen to lose weight, as many believe that smoking reduces hunger. These are misconceptions that are born out of ignorance. The health defects of smoking or tobacco consumption far outweigh any benefit that it may lay claim to. Fatal diseases such as cancer, heart and respiratory diseases are among the repertoire of health conditions that may result from tobacco usage.

Every year WHO comes up with a theme for WNTD and that theme becomes the agenda for anti tobacco consumption activities all through the year. This year the theme is "Ban tobacco advertising, promotion and sponsorship". These are the three basic tenets which ensure the survival of the tobacco industry which is compelled to replace the six million consumers that tobacco kills each year.

During recent years efforts were on to target younger consumers and this was clearly shown in the marketing strategy of the tobacco industry which was more active in places frequented by the youth, like the movies, internet, magazines or billboards. Therefore, in accordance to the 2008 theme, "Tobacco- Free Youth," efforts were on against advertisements and other marketing strategies that targeted the youth.

Direct promotion through advertising and indirect promotion through sponsorship of popular public events and distribution of freebies such as T-shirts, key chains, hats or cigarette lighters among teenagers are among the popular methods to promote tobacco products. Children are also constantly exposed to imageries and references of smoking through the internet. Stealth marketing or peer group recommendation is also associated with the tobacco promoters.

Also, the tobacco companies frequently engage in 'corporate social responsibility ' (CSR) activities which include socially acceptable engagements such as sponsoring research, education and charities, giving the public the wrong impression that they are socially acceptable and responsible citizens. These are some of the common promotional methods adopted by the tobacco industry that the WHO hopes to stop.

Several countries have banned the display of tobacco products in retail shops and this has been successful in reducing the misconception that tobacco use is a frequent and socially acceptable practice. Besides, it has also helped in bringing about a decline in smoking among teenagers.

This year there is an open call to the government, civic bodies and the general public to ban the marketing of tobacco products and to free themselves from the unscrupulous manipulations of the tobacco industry. There is an emphasis on educating the general public about the negative effects of tobacco usage and also to wean themselves off the manipulative powers of vested interests.

Avoiding tobacco products is the need of every single country in the world. After all, the future belongs only to those who are alive to enjoy it ! 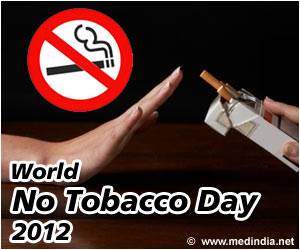