World Leprosy Day is celebrated annually around the globe on the last Sunday of January and was first observed in 1953. The date was chosen by Raoul Follereau, the noted French journalist, poet, humanitarian, and lifelong crusader for people suffering from leprosy. He chose this date because it was the third Sunday from Epiphany in the Catholic calendar, which marks the day Jesus healed a leper. In this context, it should be noted that in India, World Leprosy Day is observed on 30th January every year, which marks the day Mahatma Gandhi was assassinated in 1948. This day commemorates Gandhi's lifelong efforts to help people afflicted with leprosy and fight against discrimination, stigma and prejudice to uplift their status in Indian society.

World Leprosy Day provides a unique platform to raise global awareness about the dangers of this primitive deadly disease and highlight the fact that it is preventable, treatable and curable.
World Leprosy Day: Lets Stop Stigma & Discrimination

India has the highest burden of leprosy, accounting for 60 percent of the global burden. However, it is encouraging to know that in recent years, there has been a decline in the number of new cases by over 15,000 between 2016 and 2018. Childhood leprosy cases have also come down below 10,000. Besides India, other high burden countries include Indonesia and Brazil.

Leprosy is one of the most ancient diseases known to man. It is also called Hansen's disease after the Norwegian physician-scientist Gerhard Henrik Armauer Hansen, who in 1873 discovered the bacterium Mycobacterium leprae, the causative microorganism of leprosy. This discovery changed the prevailing belief that leprosy was a hereditary disease. The disease is also mentioned in the Bible. According to the Gospel of Matthew, following the Sermon on the Mount, Jesus descended from the hillside and cured a leper by touching and blessing him. Importantly, since pre-biblical times, lepers have been stigmatized and discriminated and considered as social outcasts.

Leprosy and its Complications

Leprosy is a chronic infectious disease caused by the slow-growing bacterium M. leprae. Since the bacterium multiplies very slowly, its incubation period is very long. As a result, symptoms may appear even after 5 years post-infection. The disease affects the peripheral nerves, skin, eyes, and the mucosal lining of the upper respiratory tract.


‘World Leprosy Day is celebrated annually on 30th January in India. It raises awareness about this deadly disease and the importance of prevention and treatment. It also highlights that leprosy can now be cured.’
Read More..


The infection spreads from an untreated leprosy patient and is usually transmitted through droplets originating from the nose or mouth. Symptoms include the following: The bacterium has a tendency to migrate to the skin and nerves, causing severe tissue damage. If left untreated, it can result in permanent disability and disfigurement. However, the disease can be successfully cured by using Multidrug Therapy (MDT), which is a combination of several drugs that effectively kills the bacterium.

How is World Leprosy Day Celebrated?

World Leprosy Day is fervently celebrated across the globe through various events and activities. On this day, both governmental and non-governmental organizations (NGOs) conduct public outreach programs to inform and educate the general public about the dangers of leprosy, as well as assure them that the disease is now curable. Doctors and other medical professionals advise people on how to recognize the symptoms and prevent the disease from spreading. Leading medical specialists also deliver popular talks to enlighten the public. In addition, rallies, walkathons, marathons and other fundraising events are organized to raise money for the care of those afflicted by the disease.

Global and country-level efforts are ongoing to expedite the eradication of leprosy. Efforts by the World Health Organization (WHO) and the Government of India are briefly highlighted below:

So, on World Leprosy Day, let's all get together to weed out stigma and discrimination associated with leprosy and tackle the disease with renewed efforts, so that it can be eradicated once and for all.

Health Experts Fear Leprosy Resurgence in Nepal
Health officials in Nepal worry that the country could lose its 'elimination status' of leprosy, as they are seeing a notable rise in the number of leprosy patients in recent years.
READ MORE

Need More Awareness on Leprosy in India
International Gandhi Award 2017 was presented to Dr M.D. Gupte and Dr Atul Shah for their work towards care and elimination of leprosy.
READ MORE

Top Facts on Leprosy
Leprosy is under control through modern medicine but is still endemic in few regions and awareness is the key to eliminate the disease.
READ MORE 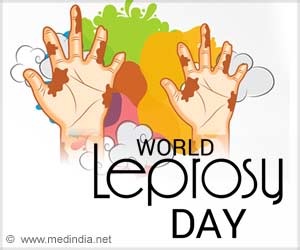