Written by Shaun DMello
Medically Reviewed by The Medindia Medical Review Team on April 6, 2015 at 6:52 PM 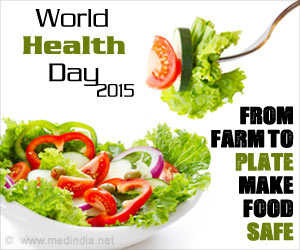 Food contamination, with microorganisms or pollutants and toxins, has become a global concern, as both risks and effects of contamination are compounded by our huge cross-border food supply chain. Contamination and unsafe foods can have a serious impact not just on health and wellbeing of affected individuals, but also on the global economy. In light of the risks to food safety, the World Health Organization (WHO) has decided to dedicate this year's celebration of World Health Day to the cause of food safety.

The goal is to highlight the risks to the food chain, as this is the best way to increase awareness about the risks posed to global communities from unsafe food. Without such awareness, it would be impossible to take measures to counter the problem and reach an effective resolution. This initiative is being championed under the slogan "From farm to plate, make food safe". This makes World Health Day 2015 especially relevant to India because of the country's pivotal role in global food production and supply, and also from the point of view of consumption, considering the fact that Indians account for about a fifth of the world's population.

The Health Costs of Unsafe Food

Foods that do not conform to food safety practices are obviously more susceptible to contamination, and are known to affect millions of people each year. There are around 200 food borne diseases and 1.5 million children succumb to diarrheal diseases each year. Almost all these cases are attributed to food and water contamination. In 2010 alone, food-borne enteric diseases caused around 351,000 deaths.


Despite the scale of the problem, most food-borne diseases can be prevented through proper food preparation practices.

According to Dr. Margaret Chan, WHO Director-General, the industrialization of food production and globalization of distribution have greatly compounded the problem as there are many more opportunities and methods by which food contamination can take place. Food can be contaminated during production on farms or at slaughter houses or while being processed or even during transportation.
Advertisement
This means that food safety rules and regulations must have a broader scope and need to be implemented, not just by food producers, but such regulations are essential across all the sectors involved in the production and distribution of food.

Food safety and stringent rules and regulations to enforce food safety become all the more essential in a global market. What would have once been a localized problem rapidly escalates to become a global health crisis, as contaminated food in one part of the world can affect consumers living on the other side of the planet. This problem is further compounded by the production and distribution of packaged and processed foods internationally. As stated by Dr. Chan, "Investigation of an outbreak of a food-borne disease is vastly more complicated when a single plate or package of food contains ingredients from multiple countries."

To combat this problem, we need better coordination between intergovernmental departments and agencies, and increased collaboration between the various sectors that are involved in the issues of both food production and food safety.

Impact of Food Safety on the Economy

Food contamination doesn't just affect the health of its victims but it also extracts a huge toll from the economy. It also weakens public confidence in food regulations and safety of a country, thereby impacting food exports, tourism and consequently, the livelihood of all those engaged in food and hospitality sectors.

This is a huge problem in both developed and developing countries and it requires more than stringent laws and regulations to enforce food security. The efficiency of various governmental and non-governmental bodies that help in the monitoring and assessment of food quality needs to be greatly improved. Timely detection and recalls of contaminated products before they hit the market can greatly help to restore public confidence.

One of the biggest contributing factors in the large toll from food borne illnesses  may be attributed to the general lack of awareness about food safety and poor levels of hygiene in the preparation of food. While the problem may be more prevalent in specific regions in developing countries, it also poses a significant risk in the developed world.

Proper hygiene and food safety doesn't just imply using a hand sanitizer before you handle food! Certain foods need to be cooked and prepared in a specific manner and some foods should never be eaten raw. Consumers must share this responsibility, as reading food labels properly can often help to avert such problems. The WHO has even issued a booklet and guide to this end called the 'WHO Five Keys to Safer Food'.
Advertisement
<< World Autism Awareness Day 2015
The Relevance of WHO's World Health Day 2015 to India >>

700,000 Kids Die Due To Contaminated Food Each Year, Make Food Safety a Priority: WHO
Bacteria, viruses, parasites, chemicals and other contaminants in our food cause over 200 diseases ....

Quiz on Food Safety for Health
Food safety is the science of handling, preparing, storing and processing food so as to prevent ......

As Incomes Rise, Food Safety is an Issue in Asia
At a pristine laboratory run by a German firm in Singapore, food samples are laid out on a long ......