Written by Shirley Johanna
Medically Reviewed by The Medindia Medical Review Team on October 15, 2015 at 7:10 PM 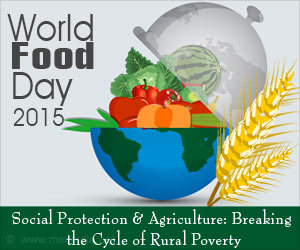 World Food Day is celebrated globally on October 16 to eradicate hunger and malnutrition. The day marks the foundation of the Food and Agriculture Organization of the United Nations (FAO) in 1945 in Quebec, Canada. World Food Day encourages people around the world to pledge their commitment to eradicating hunger.

Every year a theme is adopted to highlight the areas needed for action and provide a common focus. World Food Day marks many events such as food drives, hunger walks, awareness campaigns and engages diverse audiences in action against hunger. The theme for 2015 World Food Day is "Social Protection and Agriculture: Breaking the Cycle of Rural Poverty". The theme highlights the importance to reduce rural poverty, provide access to food and help the poor in the society move out of hunger and poverty.

The Right to Food is a Basic Human Right

Statistics show that globally, one in nine people live with chronic hunger. Nearly 60 percent of the hungry people in the world are women. Five million children below the age of five die of malnutrition every year. Every human being has the right to adequate food and the right to be free from hunger. The right to adequate food is when a man, woman and child has the physical and economic access to food or means of procurement at all times.


According to FAO, there are 805 million people who suffer from hunger in the world. They do not have adequate food to live a healthy and active life. The number of hungry people in the world increases when there are seasonal food shortages. More than 70 percent of people who suffer from hunger live in rural areas of Asia, Africa and Latin America. Many of them are farmers. Farmers who feed the world are hungry themselves. Many farmers lack access to good seeds, storage for their crops, transportation, well-functioning markets and finance. Global hunger problem can be significantly reduced by focusing on the needs of farmers. Supporting farmers can improve productivity, reduce food losses and increase farmers' incomes.
Advertisement

Consequences of Hunger and Poverty

When hunger and poverty are neglected, the cost is too high; the world as a whole loses when people do not have sufficient food to eat. People who suffer from hunger have learning difficulties, poor immunity, less productivity at work, and live shorter lives. Globally, around 26 percent of the children are stunted due to malnutrition. Two billion people suffer from one or more micronutrient deficiencies. Hunger and poverty lead to global insecurity and environmental degradation.

Is It Possible To End Hunger In Our Lifetime?

It is possible to end hunger in our lifetime. The world produces enough food to feed every single person. In recent decades there has been progress in fighting hunger and poverty.

The world leaders signed a commitment in September 2000 to achieve eight Millennium Development Goals by 2015. One of the goal is to eradicate poverty and hunger. Forty countries have achieved the target to halve the number of people who suffer from hunger by 2015. Over the last two decades, the likelihood of a child dying before age five has been nearly cut in half. Since 1990, extreme poverty rate have also been cut in half.

The number of people in developing regions who live in extreme poverty has come down significantly from 43 per cent in 1990 to 17 percent this year.

Social Protection is the Key

Social protection could play a crucial role to end hunger and malnutrition, says a new report by the United Nations Food and Agriculture Organization. Social protection is referred to all government programs that try to help vulnerable people, and protect them against economic and natural shocks that may cause their losses of income and assets that affect their livelihoods. Social protection policies and programs could be pension schemes and guaranteed health insurance that some developed countries already enjoy.

Social protection is on the 2030 Agenda for Sustainable Development. It is considered an important means to achieve the goal of ending poverty within the next 15 years.

Without social protection, the poor in society are at constant risk of hunger and poverty, especially when faced with economic or natural crisis. Nearly 75 percent of the malnourished people in the world live in rural areas. Effective social programs in such areas could pave the way to alleviate hunger and malnutrition.

When the government includes social protection programs in national development strategies and policies, it can provide greater income stability as well as the ability to manage risk thus contributing to reduce poverty and food insecurity in the long-term.

Social protection offers hope and the ability to plan for the future to the vulnerable. It also helps increase on-farm and non-farm activities, strengthening livelihoods and increasing income. Social protection programs also foster more investment in the education and health of children, which in turn reduces child labor.

With most of the world's poor and hungry still living in the rural areas and still dependent on agriculture, combining social protection with agricultural development programs could improve the lives of farmers. Policy and programs for rural development, food security, poverty reduction, and nutrition need to assist the joint role of social protection and agriculture in fighting poverty and hunger. Ending hunger and poverty is not just crucial, but also a good investment for society.

More News on:
Why Do We Eat - Nutrition Facts Diet Lifestyle and Heart Disease Hunger Fullness and Weight Control Label Lingo on Food Items: Decoded Hungry? - But you Just Ate! Why does your Stomach Growl with Hunger Tips for Healthy Fasting During Ramadhan Top Diet Foods that Make you Fat Top Food for Dieters Selenium - Natural Source Better than Supplements

Food Security may be Put at Risk by Increasing Climate Warming
A University of Washington scientist has said that climate warming caused by greenhouse gases is ......

Passing Bowls and Serving Themselves Teaches Kids to Respond to Hunger Cues
When child-care providers sit around a table together with children at mealtime, passing bowls and ....