World Day Against Child Labor 2015: Every Child Has the Right to Education 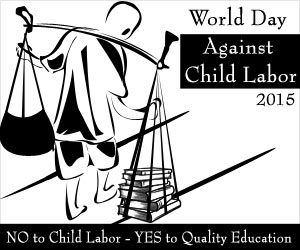 Child labor refers to the employment of children in any work that deprives them of their childhood and denies their fundamental right to education. Child labor is considered exploitative and legislations across the world prohibit this practice.

However, these laws do not consider 'all' work by children as child labor. Exceptions include work by child artists, supervised training and certain categories of work such as those by Amish children who are traditionally obliged to perform some work to help their parents.

Nearly 168M Kids Still Engaged in Child Labor
A new report has revealed that some 168 million children around the world are still engaged in some form of child labor.
Advertisement

According to the International Labor Organization's (ILO) most recent estimate, as many as 168 million children worldwide are in Child Labor, out of which 120 million are between the ages 5 and 14, and five million live in slavery-like conditions.

Child Labor Age Limit To Be Raised From Fourteen To Eighteen
According to official sources the Central Government of India is planning to increase the age bar on child labor from 14 years to 18 years.
Advertisement
In 2015, more than 55 countries, including India, marked the World Day with the theme 'No to Child Labor, Yes to Quality Education,' and with hundreds of events.

Poverty is undoubtedly a dominant factor that forces children into work. Children from poor socio-economic backgrounds are forced into labor to supplement their household's meager income.

Lack of free education in some developing countries has also contributed to children dropping out of school and entering into the labor force.

According to the 'Eliminating Child Labor in Tobacco Growing Foundation' (ECLT), the prevalence of AIDS in developing countries has resulted in enormous number of orphans who are forced into child labor.

There's an acute lack of national laws and policies that are meant to protect children from hazardous labor. In many countries, despite laws that criminalize child labor, they're not effectively implemented. Employers prefer to hire children because they are cheaper than their adult counterparts.

Some of the other causes of child labor include parental illiteracy, ignorance of parents about the consequences of child labor, lack of employment for adults, non-availability and non-accessibility to schools, and irrelevant school curriculum.

In India, more than 10 million children have full-time or part-time jobs. Large numbers of children work in rural areas, particularly in agriculture, but children work almost in every sector like fishing, mining, construction, manufacturing and domestic services.

As laborers, children work in dangerous conditions where they're surrounded by heavy machinery and chemicals. There have even been many instances of death due to biological, physical and chemical hazards. Malnutrition and nutritional deficiencies are highly prevalent among working children.

Quality Education is the Key to End Child Labor

Education is a very important part of development and a crucial step to tackle child labor. Many child laborers do not attend school; those who attend classes, also continue to work.

A recent UNESCO data on school enrollment reveals that 58 million children of primary school age and 63 million adolescents of junior secondary school age are still not enrolled in school. Many who are enrolled do not attend school on a regular basis.

As adults, former child laborers are more likely to end up in poorly paid jobs or to be unemployed. The key tool to end child labor is free and compulsory good quality education for all children up to the minimum age for admission to employment.

The new ILO report 'The World Report on Child Labor 2015' prepared for the international day states that around 20% to 30% of children in developing countries complete their schooling and enter the labor market by the age of 15.

"Keeping children in school and receiving a good education until at least the minimum age of employment will determine the whole life of a child. National policies should be directed towards removing children and young people from hazardous jobs and, of course, towards removing the hazards in the workplace," said Guy Ryder, ILO Director-General.

The report shows that young persons who have been burdened by work as children are more likely to be in unpaid family jobs or in low paying jobs.

"Children, whose education is denied or impeded by child labor, enter adolescence with lesser competencies and skills needed for securing decent work, and much more likely to be vulnerable to joblessness or low paid, or insecure work in hazardous conditions. Their vulnerability is frequently exacerbated by related factors such as health problems stemming from their premature involvement in work," Ryder explained.

Under ILO's School-to-Work Transition Survey program, it was found that in developing countries, many youth leave school at or below the age of 15 years old.

"Early 'school leavers' who do eventually transit are less likely than more-educated youth to ever secure stable jobs. Those leaving school prior to the age of 15 years that do manage to secure jobs take longer to do so than other youth," ILO said

ILO report also reveals that around 75 million youth those aged 15 to 24 are unemployed, while more have to satisfy with jobs that do not come under decent work category. The presence of opportunities for the youth to get decent work has an effect on the prevalence of child labor. ILO defines decent work as that which provides a fair income and security in the workplace.

As per ILO global estimate, there are more than 47.5 million adolescents aged 15 to 17 in hazardous work. Hazardous work is the employment that can harm the health and safety of children. The ILO considers this the "worst form of child labor."

The number of hazardous adolescent workers is greatest in India at 2.4 million.Countries such as Cambodia, Vietnam, and Laos where agriculture predominates in the rural areas have highest rates for hazardous work. "This highlights the significance of area- and sector-specific targeting of interventions to eradicate child labor," ILO said.

The World Report on Child Labor 2015 recommends early interventions to get children out of child labor and into school. It also urges nations to take actions to facilitate the transition from school to decent work for young people. The 47.5 million young people in hazardous work and the girls and young women must be given special attention.

According to the 2011 Census, in India, as many as 4.35 million children between 5 to 14 years are working as child laborers. A new report released by Child Rights and You (CRY), a day before the international day against child labor, reveals that over 10 million children continue to be a part of the country's workforce.

India had formulated a National Policy on Child Labor in 1987. This policy seeks to adopt a gradual approach focused on rehabilitation of children working in hazardous employment situation. It envisioned strict enforcement of child labor laws combined with development projects to address the root causes of child labor.

Around a decade ago, the Juvenile Justice (Care and Protection) of Children Act of 2000 made child labor a crime, punishable with a prison term, for anyone to procure or employ a child in any hazardous employment or in bondage. And the Right of Children to Free and Compulsory Education Act of 2009, mandates free and compulsory education to all children aged 6 to 14 years. This legislation also mandated that 25 percent of seats in every private school must be allocated for children from disadvantaged groups and physically challenged children.

Despite these efforts, child labor is still a major challenge for India.

With child labor coming down at a dismal rate of only 2.2% per year in India, a new report released by CRY reveals that it would take more than a century to end the menace in the country. The analysis also points out that child labor has increased by 53% in urban areas between 2001 and 2011.

"This dangerous trend of increase in urban child labor could be attributed to increased seasonal migration for employment and trafficking of unaccompanied minors," says Komal Ganotra, Director, Policy and Research, CRY.

The report said that about 80% of the working children are based in rural areas and most work in home-based agriculture as cultivators or in household industries.

More than half of child laborers in India are in five states namely Bihar, Uttar Pradesh, Rajasthan, Madhya Pradesh and Maharashtra. These states accommodate as many as 5.5 million of child workers. Uttar Pradesh has shown a growth in child labor by 13%, the report noted.

The Indian government on May 13, 2015 had approved an amendment to the 1986 Child Labor Act that permits children below 14 years to engage in non-hazardous industries run by family. It also permits children to work in the audio-visual and entertainment industry.

Child rights activists in India have urged the government and Prime Minister Narendra Modi to hold a public consultation on the proposed amendments to the bill. They've also demanded the removal of the provision seeking to legitimize use of children below 14 years as labor in family enterprises out of their school hours and during vacation. According to them, the proposed amendments will end up legitimizing economic exploitation of children and rob them of their childhood.

Explaining the concerns, Ruchira Gupta, Founder, Apne Aap Women Worldwide, said, "My organization works with children of de-notified tribes and other caste communities who are victims of intergenerational prostitution. Some of these children are traditional entertainers. They are trafficked for nautanki (folk theater), nautch (traditional dance) and cabaret in traveling cattle fairs in many parts of India. They are also sexually exploited in home-based brothels. This amendment will give impunity to their traffickers and they can claim dancing as a family affair or enterprise," Gupta said.

Kiran Moghe, member of Indian School for Women's Studies and Development, said, "The proposed amendments will lower the wages of adults who will be substituted for children. Also they will reduce labor standards for both leading to new forms of slavery," Moghe said.

A good quality education helps children to get a decent job in future and provides life security and in turn helps avoid poverty and Unemployment, which are the major causes of child labor.

Child Labor in Cotton Fields Culling School Attendance Rates
There is no holiday bliss for the little ones of Khammam, Andhra Pradesh.

Advertisement
<< World Environment Day 2015
Management of Pain in Hospitalized Patients With Cognitive I... >>

Remedies to Treat Diabetes Naturally
News Archive
News Resource
News Category
JUUL E-Cigarettes Banned from US Market Busy Americans Get The Least Sleep At 40 Years Deepika Padukone Rushed To Hospital After Sudden Chest Pain Vegans, Vegetarians and Fish Eaters Have Better Memory Than Meat Eaters How to Reduce the Risk of Acute Kidney Injury By Drinking Coffee?
More News
Sign up for Wellness Consult a Doctor Sign up for Selfcare