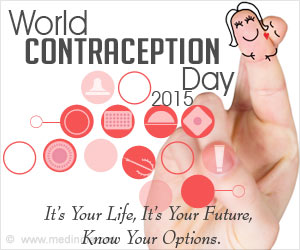 This global campaign was launched in 2007 with the vision that every pregnancy should be "wanted." World Contraception Day (WCD) is observed on 26th September every year to increase awareness about contraception and safe sex. The campaign has been disseminating critical information to enable young people make informed choices when it comes to sex, pregnancy, sexual health and reproductive issues.

According to the AGI president Jeannie I. Rosoff, women all over the world take measures to terminated unplanned pregnancies and we must respect these decisions and ensure safe abortion when it is a choice made by the woman.

While around 26 million women have legal abortions each year, around 20 million have illegal abortions. Conditions and laws regarding abortion differ across the globe and several countries prohibit abortions (except to save the woman's life). In several countries, religious laws prohibit abortion. Such prohibitions lead to women seeking illegal abortions, which are unsafe and often practiced by unauthorized quacks. The World Health Organization (WHO) defines unsafe abortions as "procedure for terminating an unwanted pregnancy either by persons lacking the necessary skills or in an environment lacking the minimal medical standards, or both." Abortions by unauthorized people and in unsafe, unhygienic conditions lead to complications and deaths.

WCD is currently supported by a coalition of 12 international NGOs and health and medical societies working in sexual and reproductive health. The NGOs which are a part of this campaign are:


"It's Your Life, It's Your Future, Know Your Options"

This year's theme is meant to convey to young people across the globe that pregnancy is an individual choice and there are options available to prevent unwanted pregnancies. Young people are encouraged to exercise their right and use contraception for safe sex and better reproductive health. Unwanted pregnancies and STIs impact both physical and psychological health.

In several countries where cultures forbid discussions of sex and related issues, such campaigns pitch in to keep young people informed and educated about the need for safe sex and safe pregnancies. Campaign partners across the globe work with communities to discuss the issue of contraceptives and also provide demos and samples.

This year's WCD theme has its own website http://www.your-life.com/ which discusses several issues and answers questions around contraception. WCD 2015 also has a digital campaign with the hash tag #AFriendOfMine.

Unwanted Pregnancies in India is Highest as Modern Contraception is Not Preferred
The World Health Organisation carried out a study to find if women in 35 low and middle-income countries use modern methods of contraception.
READ MORE