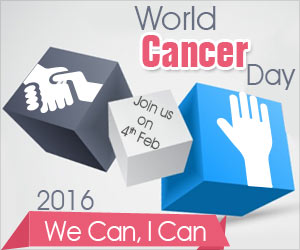 February 4th is celebrated as World Cancer Day 2016 to raise awareness about the risks involved in cancer.

UAE's Cancer Patient Care Group Marks Cancer Day by Hosting an Event in Abu Dhabi
Rahma, the UAE's cancer patient care society, will mark World Cancer Day by hosting an event on Monday in Abu Dhabi.
Advertisement
‘Cancer incidence will rise up to 1,148,757 cases in 2020, stressing the need for better awareness and care.’

Cancer incidences are set to rise during the next few years. The rise in the number of cancer cases over the last century and the subsequent expected rise require active participation in controlling incidences. The number of deaths due to cancer has been increasing due to existing misconceptions and lack of awareness that still exists among many.


The theme for World Cancer Day 2016 is 'We Can, I Can" and this theme that will extend for another couple of years.

As part of the "We Can" measure, collective action is encouraged by society at large to partake in activities which could actively support the cause of cancer. As part of the 'I Can" measure, individual people can work towards cancer support and care Some of the special gestures by celebrities and teams for this world cancer day: The increased awareness and education is expected to lower deaths due to cancer and encourage early detection. Many people in developing countries are unaware about the options available and the course of treatment, reaching these people would benefit cancer support and care.

Cervical Cancer - Incidence
Cervical cancer is the second most common cancer among women and is the primary cause of cancer-related deaths in developing countries
Advertisement
References :1. http://www.worldcancerday.org/

Tattoos A Body Art
News Archive
News Resource
Advertisement
News Category
JUUL E-Cigarettes Banned from US Market Busy Americans Get The Least Sleep At 40 Years Deepika Padukone Rushed To Hospital After Sudden Chest Pain Vegans, Vegetarians and Fish Eaters Have Better Memory Than Meat Eaters How to Reduce the Risk of Acute Kidney Injury By Drinking Coffee?
More News
Sign up for Wellness Consult a Doctor Sign up for Selfcare