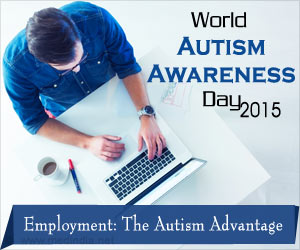 Autism and Autism Spectrum Disorder (ASD) are terms for a group of complex neurological disorders that affect communication and social interaction skills, repetitive behaviors and other behavioral anomalies.

What is World Autism Awareness Day?

According to Autism Speaks (an NGO in the US), there are tens of millions affected with autism globally. In 2007, the United Nations General Assembly adopted resolution 62/139 declaring April 2 as World Autism Awareness Day (WAAD). The day is marked to raise awareness about autism and sensitize communities to be able to positively include people with autism in education, employment and in the public sphere. WAAD encourages member states to take action for early diagnosis and intervention. WAAD is also marked in order to step up research to improve the quality of lives of people with autism.

This year, the theme for WAAD is 'employment: the autism advantage'. It is estimated that more than 80% of people with autism are unemployed. Employers have a stock concept of the neurotypical employee and miss out on the special abilities of people with autism to work with rapt attention, pattern recognition and other logical skills. There is also the need to provide people with autism adequate vocational skills training, on-the-job support and counseling.

WAAD 2015 aims at raising awareness of this sensitive issue among communities and employers. WAAD believes that people with autism have a right to gainful employment and should be able to find jobs that support their individual skills and talents. Not-for-profit organizations all over the world have been working in this direction to train people with autism and also encourage employers to hire people with autism. NGOs like Enable India in Bangalore have successfully trained a batch of people with autism in partnership with SAP labs in 2015.

Transitioning into adulthood can be a difficult period for people with autism as they deal with multiple issues such as anxiety, restlessness, occasional depression and other uncertainties. Parents and families usually help with the transition into adulthood and also to make choices regarding education, employment, etc.

Parents must also be able to teach their child (or children) with autism to be independent and function on their own. For example, they should be encouraged to run errands on their own like getting groceries or going to the bank. You should discuss issues like money, education and jobs to help them get used to real-world environments.

As they experience hormonal changes, they're likely to experience mood swings and have episodes of aggression and violence. During such times, parents, siblings and family members should offer support and help them calm down. Young adults with autism must be encouraged to talk and share their emotions, as this can reduce the number of episodes.

Some of the skills that need to be nurtured in young adults with autism include:

From an early age, parents must keep a lookout for the special abilities or talents that their child possesses. It is helpful to seek advice from a vocational counselor to identify the young adult's talents and skills. Simple jobs at home, school and in the community can help him/her gain a measure of confidence. Parents or siblings can also offer support on the job.

Supportive employment or internships are a good way to begin. Many organizations have buddy systems that assign a colleague to support a person with autism get through the initial period of learning the ropes on the job and getting used to the environment. There are NGOs in India which offer vocational training, support and placement for people with autism. Enable India in Bangalore has been training a batch of people with autism and successful in finding them placements too. Another NGO is Tamana in New Delhi, which has an autism center that supports people through a life-centered approach.

Whatever the form of employment, you must remember that people with autism are perfectly capable of maintaining a job in a supportive, positive environment. Employers must recognize that people with autism have special set of skills that may include attention to detail, ability to concentrate deeply, pattern recognition, numerical and logical skills, and verbal abilities. Employers must provide a suitable environment with adequate breaks and timeouts whenever required.

The leading cause of autism is now considered genetic: Fragile X Syndrome (FXS). A single gene, Fmr1, creates a protein for brain cells to communicate with each other. While everyone has this gene, in certain people, the gene changes; it appears broken, pinched-in or 'fragile' under a microscope. The FXS means that there is a mutation in the gene and a circuit will not work. Therefore, an autistic brain is different from birth. FXS chromosome often passes from one generation to the next with no signs or symptoms, but when it strikes, the results are rather unfortunate.

Autism is usually diagnosed between the ages 1-3 years. Sometimes, early warning signs appear when the baby is just 9-12 months old. Symptoms include lack of smiles and facial expressions, refusal to make eye contact or non-response to gestures. People with autism are often gifted in music, art, math and other visual skills.

In certain cases of children with autism, their brain cells look like 'chatterboxes'. There are more electrical energy, more chemicals and more hormones, which confuse the brain circuitry. There are also cases where the opposite is true as well. In both, it's harder for the brain to identify and follow signals. That explains why autism is such a psychedelic spectrum of extraordinary abilities and disabilities: some can't speak in whole sentences while others can play long compositions on the piano without taking any formal lessons, can't tell right from left but can figure out cube roots quicker than a calculator.

Autistic children are not just introverted; they exist in a world entirely of their own creation. They usually do not respond to hugs or baby-talk, and rarely show emotions. Some kids wander off on their own, indulge in repeated head banging or walking in circles continuously. Most have issues with food  some eat indiscriminately, even dirt; while some others will eat only pureed food, even at four years of age.

How can Autism be treated?

There is no cure for autism. The symptoms can be treated; however, drugs treat only overt symptoms such as anxiety and aggression.

Early intervention is the best way to help children with autism. Most go to inclusive schools to build-up their skills in social interactions. They're usually trained to cope in classroom environments. Usually supportive teachers are available to help a child cope with the requirements of schooling.

It's a multidisciplinary approach that involves a team of neurologists, speech therapists, inclusive education professionals and counselors. Parents of children with autism are also counseled and supported to cope with handling a special-needs child. Each individual is different and hence the early intervention program varies. Children with autism may also have allied medical issues like sleep disorders and immunity issues.

What is the Prevalence of Autism in India?

The Autism Speaks website states that about 1.7 million individuals are autistic in India.  There are no official studies by the government to determine the number of children with autism in India. But the first-ever study conducted in India was by the International Clinical Epidemiology Network Trust (INCLEN), which released its results in 2013.

As per the study, more than 10 million children in India suffered from autism. That means one in 66 children had autism. The survey was conducted on 4,000 households in Andhra Pradesh, Odisha, Himachal Pradesh, Haryana and Goa in collaboration with AIIMS, Thiruvananthapuram Medical College and universities of Stanford and Pennsylvania, USA.

Autism is not recognized as a separate form of disability in Persons with Disabilities (Equal Opportunities, Protection of Rights and Full Participation) Act, 1995, the primary piece of legislation that decrees the rights of and benefits for persons with disabilities in India. However, advocacy movements have succeeded in the inclusion of autism in the National Trust Bill - 'National Trust for Autism, Cerebral Palsy, Mental Retardation and Multiple Disabilities Act 1999', the first ever legislation to be passed in India that recognized autism as a distinct condition of its own.

AUTS2 Gene Mutation Which is Linked to Autism Disorders, Stimulates Other Genes in Early Brain Development
Epigenetic changes removed the blocking mechanism of a protein complex long known for gene suppression, and transitioned the complex to a gene activating role instead.
READ MORE