World Alzheimer's Day is observed annually on 21st September around the world with the primary aim to raise awareness and challenge the common stigma that surrounds Alzheimer related dementia.
World Alzheimers Day


World Alzheimer's Day theme for the year 2018 is "Every 3 Seconds, Someone in the World Develops Dementia."

The chief goal of the campaign is to:

Alzheimer's is an irreversible, progressive disease and is a common cause of dementia that impairs intellectual and social skills. People with this disease may initially experience mild confusion and have difficulty in remembering things. Eventually, they undergo dramatic personality changes.

Various Alzheimer's organizations around the world unite their efforts on raising awareness about Alzheimer's and dementia on World Alzheimer's Day. Originally this day was a part of World Alzheimer's Month, but it was separately launched in September 21st, 1994 to celebrate the 10th anniversary of Alzheimer Disease International (ADI) association.


‘On World Alzheimers day, several Alzheimers organizations around the globe unite together in creating awareness to fight memory-robbing diseases such as Alzheimer's disease and dementia.’


Since its initiation, the impact of World Alzheimer's Day is rising. However, the stigmatization and lack of knowledge surrounding dementia remains to be a global issue that calls for global action.


Facts and Statistics on Alzheimer's

Simple Lifestyle Tweaks to Help you Reduce the Risk of Alzheimer's

So, let's join together and reach out to those affected by Alzheimer's wherever they are and let us support them to live a fulfilling and independent life. 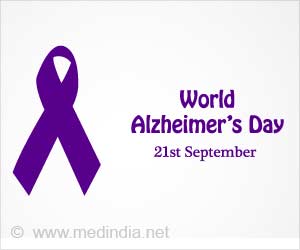 World Alzheimers Day 2017: Remember Me
World Alzheimer's Day observed on 21st September raises awareness of the condition to help family and friends to care for those living with the disease.
READ MORE