Women At Increased Risk For Zika 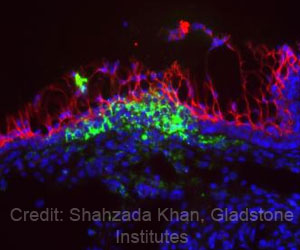 Vaginal immune system is suppressed in response to RNA viruses, such as Zika.

The delayed antiviral immune response allows the virus to remain undetected in the vagina, which can increase the risk of fetal infection during pregnancy.

Zika Fever
Zika virus is transmitted to humans by infected mosquitoes which causes mild fever with maculopapular rash. No treatment or vaccine is currently available.
Advertisement
‘Inflammatory drugs could be a way to protect women against sexually transmitted RNA viruses like Zika.’

The new finding discovered by scientists at the Gladstone Institutes suggests that, when transmitted sexually, women are both more susceptible to contracting RNA viruses and have a harder time clearing the infection from their systems.

Florida Reports First Three Cases of Zika Virus
Florida Health Department encourages Florida residents and visitors to protect themselves from all mosquito-borne illnesses by all means possible.
Advertisement
The dampened vaginal immune response is especially concerning, because it gives the virus more time to spread to the fetus if a woman is pregnant or becomes pregnant during the course of infection.

In the study, published in the Journal of Experimental Medicine, the researchers.
Typically, infected cells release a molecule called interferon as the first line of defense against an infection.

Interferon starts to combat the virus and, more importantly, alerts neighboring cells that the body is under attack, which kicks the rest of the immune system into gear.

After three days, animals infected systemically showed a strong interferon response and began to clear the virus from their systems.

In contrast, vaginally infected mice still had extremely high levels of the virus in the vagina and no signs of interferon.

"We were very surprised about the lack of an interferon response," said first author Shahzada Khan, PhD, a postdoctoral scholar in the Sanjabi laboratory.

Interferon is elicited as the first step in an immune response, and the fact that it was barely detected it in the vagina was very alarming.

Without interferon, the rest of the immune system cannot be triggered efficiently, making it extremely difficult for the body to fight viral infections.

Only when the virus spread to the lymphoid tissues did the systemic immune system begin to respond and control the virus, approximately one week after infection.

However, even after the virus was cleared from the rest of the body, traces of Zika remained in the vagina.

When the scientists primed the vagina with an inflammatory drug, administered like a microbicide, interferons were released in the vagina and the mice were protected from Zika.

Mice treated with the drug and vaginally exposed to Zika were able to completely clear the virus within two days of infection.

The researchers say that similar inflammatory drugs could be a way to protect women against sexually transmitted Zika, but more research is needed to evaluate the safety of the drugs during pregnancy.

The scientists validated their findings with another RNA virus called lymphocytic choriomeningitis virus (LCMV), which is a rodent virus often used in research to model other pathogens.

Similar results for both Zika and LCMV suggest that the dampened immune response is not unique to Zika and may have implications for other RNA viruses, most notably HIV.

RNA viruses, like Ebola or hepatitis C, store their genetic code in the form of RNA, whereas viruses like the herpes virus or chickenpox store the same information in the form of DNA.

"There is something unique going on in the female reproductive tract that makes women particularly vulnerable to RNA viruses," said Sanjabi.

The next goal is to figure out why this is the case--whether it's a defense mechanism elicited by the pathogens themselves or an immunological loophole in the vaginal tissue.

Zika Virus Infection Linked to Severe Damage of the Retina in Infants
Congenital Zika syndrome has been associated with retinal abnormalities in the newborn, suggests a new study.

Test Your Knowledge on Zika Virus
Zika virus is a mosquito-borne virus that causes fever, headache, skin rashes, joint and muscle pain in infected individuals. The symptoms usually last for only 2 to 7 days. Fetal symptoms vary and have led to International concern.