Walnuts, packed with nutrients were found to be linked to promote better health and also promote feelings of fullness, thereby discouraging overeating and craving.

In a new brain imaging study, consuming walnuts activated an area in the brain that is linked to regulating hunger and cravings, reveal the research team of Beth Israel Deaconess Medical Center (BIDMC).
Walnuts Make You Less Hungry And More Full


The findings of the study were published in the journal Diabetes, Obesity and Metabolism. This is the first time the neurocognitive impact these walnuts have on the brain have been revealed.


‘Functional magnetic resonance imaging (fMRI) reveals the increased activity that occurs in the part of the brain after consuming walnuts regulates satiety and cravings.’


Olivia M Farr, Ph.D., the study's first author, an instructor in medicine in the Division of Endocrinology, Diabetes, and Metabolism at BIDMC said that we usually do not think about what we eat and how it impacts the activity in the brain.

Olivia said, "We know people report feeling fuller after eating walnuts, but it was pretty surprising to see evidence of activity changing in the brain related to food cues, and by extension what people were eating and how hungry they feel."

To determine exactly how walnuts can put an end to cravings, Farr and colleagues, used functional magnetic resonance imaging (fMRI).

The research team also observed how consuming walnuts can change activity in the brain, in a study led by Christos Mantzoros, MD, DSc, Ph.D. hc mult, director of the Human Nutrition Unit at Beth Israel Deaconess Medical Center and professor of medicine at Harvard Medical School.

About ten volunteers with obesity were recruited and were asked to live in BIDMC's Clinical Research Center (CRC) for two five-day sessions.

The controlled environment of the CRC allowed the research team to keep a close watch on the volunteers' exact nutritional intake, without depending on volunteers' often unreliable food records, which is a drawback to many observational nutrition studies.

Volunteers received a walnut-free but nutritionally comparable placebo smoothie, during their other stay in the CRC, which was flavored the same as the walnut-containing smoothie.

In previous observational studies, the participants had reported feeling less hungry during the week, when they consumed walnut-containing smoothies than when given the placebo smoothie during the week.

fMRI tests that were done on the fifth day of the experiment gave Farr, Mantzoros and the team a clear picture as to why.

While in the machine, images of desirable foods such as hamburgers and desserts, neutral objects such as flowers and rocks and less desirable foods like vegetables were shown to the volunteers.

When volunteers were shown pictures of highly desirable foods, fMRI imaging revealed increased activity in a part of the brain called the right insula after volunteers consumed the five-day walnut-rich diet compared to when they had not consumed a walnut-rich diet.

Mantzoros said, "This is a powerful measure. We know there's no ambiguity regarding study results. When participants eat walnuts, this part of their brain lights up, and we know that's connected with what they are telling us about feeling less hungry or more full."

This area of the insula in the brain is involved in cognitive control and salience, which means that volunteers were paying more attention to food choices and also selecting the less desirable or healthier options over the highly desirable or less healthy options.

Farr and Mantzoros plan to test with different amounts and dosages of walnuts, to see if consuming more nuts will lead to more brain activation or if the effect stays stable after a certain amount. This study will also allow the research team to test other compounds for their effect on this system.

Similar studies can reveal how other foods and compounds like naturally-occurring hormones, impact the appetite-control centers in the brain and further research can eventually lead to new treatments for obesity.

Mantzoros said, "From a strategic point of view, we now have an excellent tool to look into people's brains, and we have a biological read out. We plan to use it to understand why people respond differently to food in the environment and, ultimately, to develop new medications to make it easier for people to keep their weight down."

Compared with other nuts, which typically contain a high amount of monounsaturated fats, walnuts are unique because the fats in them are primarily polyunsaturated fatty acids (PUFAs) and is the only nut with a significant amount of alpha-linolenic acid.

Moreover, walnuts have insignificant amounts of sodium and are cholesterol free. The tree serves a multitude of uses; it can be used as food (edible seed), medicine, furniture and dye. The walnut seed has a number of health benefits ranging from weight management to prevention and slowing of various cancers. 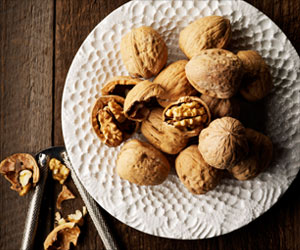 Walnuts Improve Sperm Health in Mice
Walnuts which are rich in polyunsaturated fatty acids provide key nutrients that may be essential for sperm function.
READ MORE

Hungry? - But you Just Ate!Why does your Stomach Growl with Hunger