Written by Madhumathi Palaniappan
Medically Reviewed by The Medindia Medical Review Team on April 8, 2017 at 11:01 AM 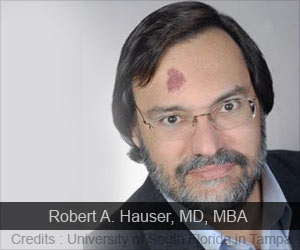 Tardive dyskinesia or involuntary movements often occur after three months of antipsychotic treatment. Medications for psychosis treatment may cause lip smacking, tongue protrusions and excessive blinking of the eyes.

A recent study from the University of South Florida found Valbenazine drug (a selective vesicular monoamine transporter 2 inhibitor) to be effective for decreasing involuntary movements in tardive dyskinesia.

Dystonia
Dystonia is a neurological condition in which the patient experiences involuntary muscle contractions. Understand the risk factors, causes & symptoms of dystonia & how it can be treated.
Advertisement
‘Tardive dyskinesia or involuntary movements are a side effect of antipsychotic medications which can significantly be reduced by the use of Valbenazine drug.’

The research study published in the American Journal of Psychiatry by the lead author Robert A. Hauser, MD, MBA professor of neurology at the University of South Florida in Tampa, stated that valbenazine drug would be effective in reducing the involuntary movements caused by schizophrenia, mood disorder or other forms of psychosis.

Hand Tremor Symptom Evaluation
Hand tremors are unintentional rhythmic movements of the hand that occur either at rest or with motion.
Advertisement
Clinical Trial
The Phase 3 placebo-controlled clinical trial was carried out on 225 people with schizophrenia, schizoaffective disorder or mood disorder.

The findings of the trial unveiled that:

The drug was well-tolerated. Drowsiness, restlessness and dry mouth were some of the reported adverse effects.

Tardive Dyskinesia
Tardive dyskinesia disorder involves involuntary movements, and is considered to be a serious side effect of antipsychotic medications.

Involuntary movements may occur when antipsychotic medications like Chlorpromazine, Fluphenazine, Haloperidol, Prochlorperazine have been taken for many months or years.

Drugs Banned in India
News Archive
News Resource
Advertisement
News Category
Death Caused by a Rare Type Amoeba: Research Study Japan Approves Smallpox Vaccine for Monkeypox Did Human Evolution Shrink Your Brain? What to Do When Your Asthma Medication Doesn't Work? Which is Better to Improve Smoker's Health  Cigarettes or E-Cigarettes?
More News
Sign up for Wellness Consult a Doctor Sign up for Selfcare