The researchers can now exploit rabies viruses machinery to deliver a Parkinson's disease medication directly to the brain.


‘Glycoprotein 29, generally present on the rabies virus can be attached to a nanoparticle stuffed full of deferoxamine (Parkinson's treatment medication) and injected into the brain. Upon injection these nanoparticles grab excess iron and relieve symptoms.’


Researchers are now using a metal-grabbing compound called deferoxamine to sop up the excess iron in patients. But a large quantity of this drug needs to reach the brain in order for them work.

To usher deferoxamine into the brain, the researchers Yan-Zhong Chang, Xin Lou, Guangjun Nie took advantage of a key part of the rabies virus- Glycoprotein 29.

Glycoprotein 29 present on the rabies virus is attached to a nanoparticle stuffed full of deferoxamine ( Anti-Parkinson's medication) and injected into the brain to trick the brain.

Africa can be Rabies Free!
A bio-mathematical method helps prove that rabies can be eliminated in Africa, as it is not a technical problem. However, with political will and sufficient financial resources, it is possible to eradicate rabies in Africa.
READ MORE

Low-cost Protocol for Rabies Prophylaxis
A new low-cost protocol to treat rabies (dog bite) has been developed by an Indian doctor and recommended by WHO.
READ MORE 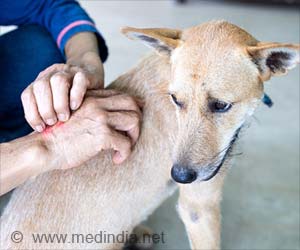