Written by Dr. Meenakshy Varier
Medically Reviewed by The Medindia Medical Review Team on November 22, 2016 at 10:50 AM 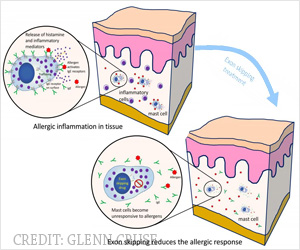 A method to stop allergic reactions by removing a key receptor from mast cells and basophils, has been developed by researchers from North Carolina State University and the National Institutes of Health (NIH).

Their work has implications for the treatment of skin allergies and asthma.

Childhood Risk of Developing Allergy & Asthma Influenced By Gut Microbiome During Infancy
The risk of asthma may be determined through analysis of gut microbes and their metabolic by-products in stool samples of babies.
Advertisement
‘Eliminating the expression of the IgE receptor on the surface of mast cells, is an innovative approach with the potential to treat allergic inflammation in millions of patients worldwide’

Asthma and allergic diseases affect up to 20% of people in developed countries, and their prevalence is increasing.


Allergic reactions are driven by mast cells and basophils - types of inflammatory cells found in tissues and the bloodstream, respectively, that function as part of our immune system.

First Complete DNA Study of Mast Cell Leukemia Hints at Possibility to Improve Therapy
First comprehensive study of the evolution of the DNA of a patient with mast cell leukemia (MCL), carried out by Cancer researchers at Cold Spring Harbor Laboratory (CSHL).
Advertisement
When body comes into contact with an allergen, immunoglobulin E (IgE) specific to that allergen acts through its receptor on the mast cell, stimulating the mast cells and basophils to release mediators, such as histamine, that trigger an allergic response.

Currently, most allergy treatments focus on either stopping the effects of histamine and other mediators or on dampening the body's overall immune response by use of steroids.

Unfortunately neither approach is totally effective, and in the case of dampening the immune response, can have significant drawbacks.

Glenn Cruse, formerly of the NIH, current assistant professor of immunology at NC State and corresponding author of a paper describing the work, along with NIH colleague and co-author Dean Metcalfe, wanted to try and block the allergic reaction at its source.

Cruse and Metcalfe looked at a gene called MS4A2, which is only expressed in mast cells and basophils, and is responsible for forming the IgE receptor on the mast cell.

The researchers utilized a technique known as exon skipping, a form of RNA splicing, to eliminate the portion of one of the IgE receptor gene's mRNA that is essential to making a protein which places the IgE receptor on the mast cell surface.

When the exon targeting therapy is stopped, the protein blocked by exon skipping is made again.

"By eliminating the expression of the IgE receptor on the surface of mast cells, we have identified an innovative and targeted approach with the potential to treat allergic inflammation in millions of patients worldwide."says Cruse.

Due to the specificity of approach for mast cells and basophils, it should have significant advantages over current therapies.

Though the findings are very promising, researchers are still in the early stages of developing this therapeutic approach.

The research appears in Proceedings of the National Academy of Sciences. Funding was provided by the NIH Division of Intramural Research of NIAID and NHLBI.

Food Allergy in Children Differs With Race and Ethnicity
The prevalence of food allergy has been increasing in the U.S affecting 8% of children adding an economic burden of $24.8 billion annually.

Dealing with Pollen Allergy
News Archive
News Resource
News Category
Milestone In Voluntary Blood Donation Achieved Samsung Reinvents Toilet for the Poor Which is a Better Form of Exercise: Daily or Weekly? First Phase of Foot-and-Mouth Disease Vaccination Shocking News: Polio Cases Return After a Decade in the US
More News
Sign up for Wellness Consult a Doctor Sign up for Selfcare