Written by Julia Samuel
Medically Reviewed by The Medindia Medical Review Team on March 31, 2017 at 12:03 PM 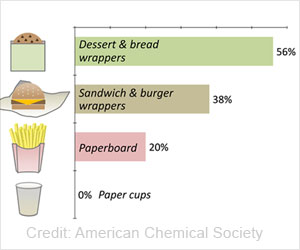 The packaging materials used for the burger and fries may contain chemicals that are harmful. Grease-proof papers, cardboards, drink containers have PFASs (per- and polyfluoroalkyl substances), a group of fluorinated chemicals.

Research teams from the University of Alabama at Birmingham's School of Medicine and the University of Notre Dame have developed a new method that enables researchers to radiolabel three forms of PFAS's and track the fate of these chemicals when they enter the body.

Fast Food Packaging Contains Potentially Harmful Chemicals That Can Leach Into Food
The packaging materials used for the burger, pizza, brownies and fries contain fluorinated chemicals which can leach into the food and cause diseases.
Advertisement
‘For the first time, toxic chemicals known as perfluorinated alkyl substances can be tagged using a method with a fluorine-18 radio tracer so researchers could see where the compound was going in the body and make sensitive measurements.’

The novelty of the newly designed method is that one of the fluorine atoms on the PFAS molecule was replaced with a radioactive form of fluorine, the same radioisotope fluorine-18 that is used for medical positron emission tomography scans in hospitals around the world.


"For the first time, we have a PFAS tracer or chemical that we have tagged to see where it goes in mice," said Suzanne Lapi, Ph.D., senior author of the study published today in the Journal of Environment Science and Technology.

Eating Combo Meals At Fast Food Joints Linked To Kids Consuming High Calorie Beverages
Kids taking combo meals at fast food joints may end up consuming potentially unhealthy high calorie sugary drinks that are included in the combo meal package.
Advertisement
"Each of the tracers exhibited some degree of uptake in all of the organs and tissues of interest that were tested, including the brain. The highest uptake was observed in the liver and stomach, and similar amounts were observed in the femur and lungs."

PFASs are often used in stain-resistant products, firefighting materials and nonstick cookware and not meant for ingestion. Previous studies have shown PFASs can migrate, contaminating the food and, when consumed, accumulating in the body.

Tool To Measure PFAS's in the Body

Now that it appears likely that any PFASs that can be synthesized and isolated could be radiolabeled and used to directly measure uptake and biodistribution kinetics in biological systems, it opens the possibility of directly measuring uptake in human subject volunteers.

Lapi says the new novel tool developed by the research teams can be used for studying PFAS behavior in environmental remediation studies to measure the fate of radiolabeled compounds in environmental treatment systems.

"This is possible since trace amounts of the compounds are easily measurable and the radioactivity short-lived," said Graham Peaslee, Ph.D., the study co-author and professor of experimental nuclear physics in the College of Science at the University of Notre Dame. "It's an important discovery because PFASs are a really persistent chemical that, once in the bloodstream, stays there and accumulates, which is not good."

In addition to kidney and testicular cancer, scientists have previously found high cholesterol, thyroid disease, pregnancy-induced hypertension and ulcerative colitis to be correlated to the amount of perfluorooctanoic acid, or PFOA, found in the blood of people who were exposed to the tainted water.

As a result, the Environmental Protection Agency and U.S. manufacturers reached a compromise to voluntarily remove two specific "long-chain" PFAS from the U.S. market by 2015 including PFOA. However, industry has switched from these "long-chain" forms of PFAS to shorter-chained versions of the same chemicals, Peaslee says. There are no toxicology data available for most of the alternative short-chain PFAS compounds used commercially.

Lapi's team makes radioactive molecular imaging agents for nuclear medicine using the UAB Imaging Facility's cyclotron, a type of particle accelerator that moves protons, one kind of charged particle, along a spiral path to strike a material to produce radioisotopes.

These radioisotopes can be chemically attached to molecules created to home in on biological targets of interest. These targets typically include certain receptors on cancer, and lung and heart function. They also look at different tracers for neurology.

When researchers looked at the PFAS chemicals and saw their structure, Lapi says, her group thought the chemistry of the compound was amenable enough to do radiolabeling with their techniques.

So far, Lapi says, the group has looked at three compounds, far short of the hundreds of PFASs that have been identified. "While I don't think we will look at all of these PFASs, we would like to look at different families of these compounds and see how they are distributed in the body," Lapi said.

"Because even with very small changes in these compounds, we were able to see differences in brain uptake, which is important because these may have neurological impacts. We saw different clearance patterns, blood binding and other things. We want to look at different classes of compounds, how they're excreted from the body, how they accumulate, and see if we can really say something about how you would get rid of these compounds."

The next step after that would be to identify how this newly discovered technique could be used to clean up compounds in environmental situations where there is a contaminate issue.

Bitter Truth About Fast Foods
Read along to find out more about the 7 shocking things that make up for your sandwiches, burgers and fries, that shouldn't be there.

Fast Food Addiction in Teenagers
Food addiction is a growing threat among teenagers. Find out how to combat the problem with preventive tips and strategies for overcoming food addiction.

Drug Side Effects Calculator Sinopril (2mg) (Lacidipine) Blood Donation - Recipients Accident and Trauma Care Blood - Sugar Chart Calculate Ideal Weight for Infants Find a Doctor How to Reduce School Bag Weight - Simple Tips Drug - Food Interactions Post-Nasal Drip
This site uses cookies to deliver our services. By using our site, you acknowledge that you have read and understand our Cookie Policy, Privacy Policy, and our Terms of Use