Women who experience multiple traumatic events during childhood or adolescence have a significantly increased risk of depression in the years leading into menopause (known as perimenopause).

Depression among women, during their transition to menopause is common, and it has not been possible to identify those at increased risk for major depressive disorder (MDD).
Teen Trauma Increases Risk of Depression During Menopause


Those women who experienced their first traumatic event in their teens are especially susceptible to depression during perimenopause, even if they have not been diagnosed with depression previously.


‘Early life stress and the timing of its occurrence have significant impacts on the development and functioning of the regions of the brain responsible for emotions, mood, and memory.’


The study conducted by a team of researchers from the Perelman School of Medicine at the University of Pennsylvania, is the first to focus on the role of childhood adversity in the onset of MDD during the menopause transition, and how the onset of MDD might be affected based on when the traumatic event occurred.

"Our results show that women who experience at least two adverse events during their formative years - whether it be abuse, neglect, or some type of family dysfunction- are more than twice as likely to experience depression during perimenopause and menopause as women who either experienced those stressors earlier in life, or not at all," said lead author C. Neill Epperson, MD, a professor of Psychiatry and Obstetrics & Gynecology at the Perelman School of Medicine at the University of Pennsylvania, and director of the Penn Center for Women's Behavioral Wellness.

"This suggests that not only does early life stress have significant and long-lasting effects on the development and function of the regions of the brain responsible for emotions, mood, and memory, but the timing of when the event occurs may be equally as important." Epperson added.

In the study, 243 women between 35 and 47 years of age were enrolled. They were in their perimenopausal stage with normal menstrual cycles.

They underwent behavioral, cognitive, and endocrine (hormonal) evaluations at predetermined intervals from 1996-2012.

During the course of 16 years, each woman also completed roughly 12 assessments for cognition and mood and underwent blood tests to measure hormone levels.

"Following these women for so many years allowed us to track the significant changes many of them experienced with the onset of the transition to menopause" said Mary Sammel, ScD, a professor of Biostatistics in Penn's Center for Clinical Epidemiology and Biostatistics, and a co-author on the study.

Phone interviews were conducted between study years 14 and 16, to assess menopause status, and in the year 16, researchers used an Adverse Childhood Experiences Questionnaire (ACE-Q) to assess the relationship between stressful or traumatic events experienced in adolescents and health outcomes.

The most commonly reported ACE were:
Most ACEs had occurred before the onset of puberty, suggesting that these traumatic and stressful events typically begin quite early in development.

The results showed that 52 women (22.4%) were diagnosed with MDD prior to experiencing any menstrual irregularity (premenopause), while 48 (20.7%) experienced their first MDD during perimenopause.

Women who reported having experienced two or more ACEs after the onset of puberty were 2.3 times more likely to have their first experience of MDD during perimenopause, compared to those who experienced ACEs before puberty or those who did not experience any ACEs at l.

The undetected depression may be unmasked by the hormonal changes that occur during menopause, in women who experienced ACEs, particularly when the events occurred after puberty.

"There's clearly a strong link between childhood adversity and risk of depression, throughout a woman's life, but particularly during the transition to menopause," said senior author Ellen W. Freeman, PhD, a research professor of Obstetrics & Gynecology at Penn, noting that dramatic changes in hormone levels are experienced during both puberty and menopause. "Our study points to the need for more research examining the long-term brain effects of childhood adversity, particularly around the time of puberty."

Further research is needed to determine the effects of frequency and severity of ACEs, and the potential impact of hormone therapy on the risk of MDD during menopause.

The results are published in the Journal of Clinical Psychiatry. 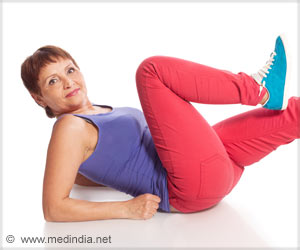 Regular Exercise After Menopause Helps Reduce Weight, Improves Heart Health
The change in the hormonal milieu at menopause is associated with an increase in total body fat and an increase in abdominal fat.
READ MORE

Women Have Better Memory Than Men But Only Till Menopause
Women report increased forgetfulness and ''brain fog'' during the menopausal transition and at risk for memory impairment and dementia in contrast to men.
READ MORE

Hormone Replacement Therapy Effective for Early Menopause Symptoms
Hormone replacement therapy (HRT) is the best treatment for POI that gives the body estrogen and other hormones that ovaries are not making.
READ MORE