Written by Rishika Gupta
Medically Reviewed by The Medindia Medical Review Team on December 1, 2017 at 1:08 PM 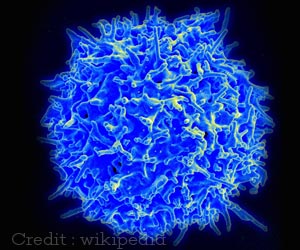 Anti-aging proteins, a well known protective against age-related diseases, neuro-degeneration, and cardiovascular disease can now be targeted to rejuvenate cells in the immune system. The findings of this study are published in Journal of Experimental Medicine.

The protein in question is called SIRT1, more commonly known for being activated by red wine. In the new study, published in the Journal of Experimental Medicine, the scientists found that it is also involved in how cells in the immune system develop with age.

Risk of Heart Disease Higher in Those With Autoimmune Diseases
Crohn's and ulcerative colitis, rheumatoid arthritis and other inflammatory diseases increase the risk of heart disease and mortality.
Advertisement
‘Increased number of mature cytotoxic T cells in the body have been associated with age-related, autoimmune and inflammatory diseases, when toxic amounts are collected.’

They wanted to find out how this anti-aging protein affects a specific category of immune cells known as cytotoxic T cells. These cells are highly specialized guardians of the immune system and their role is to kill cells infected by a virus, damaged cells, or cancer cells.


"Over the course of a person's life, with repeated exposure to bacteria and viruses, these T cells mature and eventually lose a protein called CD28," said Gladstone Senior Investigator Melanie Ott, senior author of the new study. "And as these cells get older, they become more toxic to their environment."

Identifying Factors Responsible for Chronic Nature of Autoimmune Diseases
Autoimmune diseases occur due to the misguided attack of immune system. Factors for chronic nature of autoimmune diseases is identified, reveals study.
Advertisement
This aging process is accelerated by persistent viral infections, such as HIV and CMV (human Cyto Megalo Virus). In fact, HIV-infected patients accumulate mature cyto toxic T cells at a much younger age than an uninfected person.

"A higher number of mature cytotoxic T cells in the body has been associated with age-related, autoimmune, and inflammatory diseases," added Ott, who is also a professor in the Department of Medicine at the UC San Francisco. "We wanted to come up with a way to counteract this phenomenon."

When a young (or naive) T cell is in a resting state, it uses oxygen to "breathe". Once it is activated to defend the body against a bacteria or virus, it shifts into enhanced glycolysis and uses sugar to get an immediate boost in energy. This is useful to jump into action, but it isn't sustainable for long-term performance.

"You can think of it like a 60-meter sprint runner who needs a quick boost of energy to finish the race, in comparison to a marathon runner who needs different energy sources to keep going for a long period of time," said Ott.

As the cells age and lose CD28, they can shift into glycolysis much more quickly if breathing is inhibited. They also lose the anti-aging protein SIRT1. This becomes a problem, as it makes them more toxic to the cells around them.

"We studied human T cells, isolated from blood donors of all ages, to compare mature cytotoxic T cells with naive ones," said Philip Ansumana Hull, graduate student in Ott's lab and one of the first authors of the study.

They found that naive T cells have a high concentration of SIRT1. This stabilizes an entire mechanism that prevents the cells from entering glycolysis to use sugar as an energy source, and limits their toxic effects.

As the cells age, they lose SIRT1, which changes their basic metabolism. They can then rapidly shift into glycolysis and start producing more toxic proteins called cytokines, which could lead to inflammatory diseases.

Based on a better understanding of the crucial role played by SIRT1 in the aging of T cells, the researchers identified two potential new drug targets.

First, new drugs could be developed to strengthen SIRT1 to rejuvenate mature cytotoxic T cells or keep them from progressing too quickly into a highly toxic state.

"This could postpone the development of age-related diseases," said Mark Y. Jeng, the study's other first author and former graduate student in Ott's lab. "It could also help people with a weaker immune system fight infections or better respond to immune vaccination, such as seniors or chronically-infected patients."

Alternatively, drugs could be used to obtain the opposite effect and encourage the T cells to be more toxic. By temporarily making young T cells more aggressive and behave like mature cells, they could, for example, support an aggressive anti-tumor response or other immune therapeutic approaches.


An Anti-Aging Protein Could Be Targeted to Rejuvenate Immune Cells - (https://gladstone.org/about-us/press-releases/anti-aging-protein-could-be-targeted-rejuvenate-immune-cells)

Inhibiting an Enzyme can Help Fight Autoimmune Diseases Such as SLE
An enzyme, called cGAS, sounds an alarm for the body's innate immune system. Activating this enzyme causes AGS and SLE, while inhibiting it rescues them.

Study Finds Out How Protein That Plays Key Role in Cancer and Autoimmune Diseases is Activated
A new study has identified the process through which a complex protein that plays a crucial role in the development of cancer, viral infection and autoimmune diseases is activated.

Top 7 Most Essential Anti-Aging Ingredients That Work
News Archive
News Resource
News Category
Milestone In Voluntary Blood Donation Achieved Samsung Reinvents Toilet for the Poor Which is a Better Form of Exercise: Daily or Weekly? First Phase of Foot-and-Mouth Disease Vaccination Shocking News: Polio Cases Return After a Decade in the US
More News
Sign up for Wellness Consult a Doctor Sign up for Selfcare