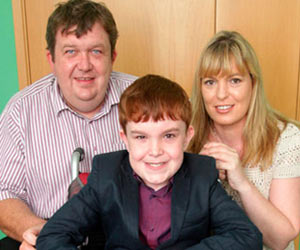 A first of its kind, stem cell based tracheal transplant in a 12 year old child is functioning well, according to a two year follow up study published in the journal Lancet. This type of transplants may offer new therapeutic options for patients with organ failure, think the surgeons. This is the first attempt to grow stem cells in vivo i.e. within the body rather than in a laboratory, in a child.

Ciaran Finn-Lynch, a 12 year old boy, underwent a stem cell based tissue engineered tracheal (windpipe) replacement in March 2010 at Great Ormond Street Hospital (GOSH), where Prof. Martin Elliott, Director of the National Service for Severe Tracheal Disease in Children at GOSH, and his team removed the boy's trachea and replaced it with an adult-donor windpipe laced with the boy's own stem cells.

Ciaran was born with long-segment congenital tracheal stenosis and pulmonary sling, a rare condition in which cartilage rings in the windpipe (which normally face each other) fuse together to form solid rings during the fetal development, thus narrowing the windpipe and making it difficult to breathe.


When Ciaran was six days old, he underwent a major surgery in which a metal stent was used to hold his airway open. However, a couple of years later the stent eroded into the aorta causing bleeding in the airway. Further surgery was done in which the damaged part of trachea was replaced with a donor trachea. But in November 2009, the stent began to erode into his aorta causing severe bleeding.

So, in March 2010 he underwent this novel procedure after the surgeons found a donor trachea from an adult Italian cadaver which was stripped of the donor's cells till the inert collagen layer, and then combined with Ciaran's stem cells and transplanted. The graft was injected with additional cytokines (proteins that stimulate cell growth) to support the growth and differentiation of cells within the new trachea. After the transplant, Ciaran was also given granulocyte colony-stimulating factors (G-CSF) to induce cell growth. Martin Birchall, Professor of Laryngology, UCL Ear Institute, and a team member reveals, 'Since the treatment plan for Ciaran was devised in an emergency, we used a novel mix of techniques that have proved successful in treating other conditions. To minimize delays, we bypassed the usual process of growing cells in the laboratory over a period of weeks, and instead opted to grow the cells inside the body, in a similar manner to treatments currently being trialed with patients who have had heart attacks'.

 The graft re-vascularized (adequate blood supply to the organ was restored) within one week after surgery.

 The epithelium layer was not evident until the first year and the graft did not have biomechanical strength until 18 months, but no medical intervention was required since then.

 Chest CT scan and ventilation-perfusion scan (a test to evaluate the air flow and blood flow in the lungs) were normal.

 Ciaran had grown 11 cm in height in two years after surgery.

 Ciaran's windpipe has not yet achieved normal rigidity but allows him to breathe normally and lead the life of a normal teenager. The research team expects Ciaran's body's natural tissue repair mechanisms to continue strengthening his trachea over time.

 At two years follow up, Ciaran had a functional airway and had returned to school.

According to Director of the National Service for Severe Tracheal Disease in Children at GOSH, Martin Elliott, 'the ideal outcomes for tracheal transplants in children are normal airway and lung function, good general growth, a decent quality of life, and no further surgical interventions' which they have achieved for Ciaran. A second child to undergo this procedure after Ciaran unfortunately passed away at a later date despite successful surgery.

'We need more research on stem cells grown deliberately inside the body, rather than grown first in a laboratory over a long time,' said Martin Birchall.

Another team member, Paolo De Coppi, says, 'For the moment we are limited to engineering relatively simple organs and tissues; it will take longer for us to find ways of fully replacing the body's more complex organs, such as the heart or the intestine'.