Osteoarthritis is a degenerative condition of cartilage loss. It is the leading cause of knee joint pain and disability among the elderly and affects over 10 million people in the US. Over the last few years, several methods have been developed techniques to trepair the damaged cartilage of the knee joint . 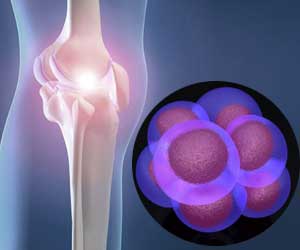 Scientists at the University of Bristol report some success with stem cell therapy for the treatment of osteoarthritis damage in knees.

Similarly, according to scientists at the Cardiff University, stem cells can be turned into cartilage cells and this cartilage can be transplanted in an affected joint.

Stem cells can be obtained from:

 Autologous stem cells are obtained from bone marrow in the iliac crest of the same individual.

These British scientists have concluded that osteoarthritis does not stop the cell regeneration process, so knee cartilage injuries can be effectively repaired by tissue engineering.

The study has proved that engineered cartilage tissue formed from the stem cells can grow and mature when implanted into patients with a knee injury. Therefore the scientists believe that the tissue engineering approach can be beneficial for cartilage regeneration even in knees affected by osteoarthritis.

ARC Professor of Rheumatology & Tissue Engineering at the Bristol University, Anthony Hollander said that tissue-engineered cartilage implanted into knees showing signs of osteoarthritis can mature within a year after implantation.

Professor Anthony Hollander and his team have been successful in autologous stem cell transplant i.e. growing human cartilage from a patient's own stem cells. Implanting such cartilages grown from the stem cells of the same person avoids immune rejection problems.

Successful repair of osteoarthritis cartilage damage depends on its ability to form a matrix within the joint.

During the study some patients did not benefit from this treatment. According to Professor Hollander the reason why not all patients benefited from the engineered cartilage is not yet totally clear. But he believes that giving the engineered tissue a longer time to settle in may be helpful.

Older patients with osteoarthritis have cartilage that is less responsive to stem cell stimulation. Their stem cells respond less to usual growth factors.

Scientists used stem cells obtained from the bone marrow. It took about a month to grow these stem cells into a cartilage of half-inch length.

An American team of scientists is also studying a stem cell approach using a single donor for multiple patients.

With multiple teams doing human clinical trials in this area the development of successful joint repair using stem cell therapies is not a distant prospect.

Comments should be on the topic and should not be abusive. The editorial team reserves the right to review and moderate the comments posted on the site.
robertemullett

We in america prefer to behave like we're to date above the widespread problem that people continuously notice about in other areas of the planet, when in a high degree our subtle, widespread problem has simply been institutionalized the truth is. Stem Tissues unlike what's occurring Leg is assisting individuals who suffer from Necrosis to Pain-Management since 1990 from everything. As a substitute to leg surgery.

It is good news for most of the people with knee joint pain BUT not for all as it looks from reading different article. Now the question is "Is it approved b FDA?" and how safe is it. Are there any side effects in the long run. I am living in Saudi Arabia hailing from India. Is it available in the middle east or in India? hmohi

Are any PRP sites accepting volunteers for knee treatment? I am retired, healthy, athletic. The cost for PRP is prohibitive for me. But, I do not want to undergo joint replacement. I live in New Jersey.

I am a 67 year female. Nurse. I have always been very athletic. I would love to be a part of the trials. I live about 70 miles south of st.louis Washington university. My phone # is 573 330 5565. Please let me know if you have info for me. Thanks cosondra.

Scientists in Scotland are planning to test a new technique of "knitting together" torn knee tissue using stem cells in patients.

Stem cells from the patient are being used by scientists to rebuild a natural joint when replacing a hip or a knee.

Understanding the basics about our back and our posture is very important in preventing back pain and improving workplace productivity.

Hypermobility Syndrome is a condition in which a person can move his joints far beyond the normal range.