Written by Rishika Gupta
Medically Reviewed by The Medindia Medical Review Team on November 11, 2017 at 3:43 PM 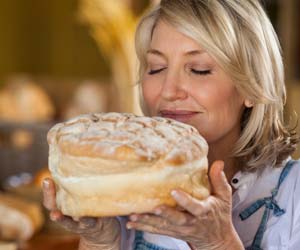 Smell tests can help treat patient's susceptible to Alzheimer's disease before it ever develops found a new study published in Journal of Alzheimer's Disease.

Having an impaired sense of smell is recognized as one of the early signs of cognitive decline, before the clinical onset of Alzheimer's disease.

The researchers at CUMC and NYSPI have found a way to use that effect to determine if patients with mild cognitive impairment may respond to cholinesterase inhibitor drugs to treat Alzheimer's disease.


Cholinesterase inhibitors, such as donepezil, enhance cholinergic function by increasing the transmission of the neurotransmitter acetylcholine in the brain. Cholinergic function is impaired in individuals with Alzheimer's disease.

Quiz On Alzheimers Disease
Alzheimer's disease (AD) is the most common form of dementia. Participate in this quiz to find out how much you know about this debilitating disease.
Advertisement
Cholinesterase inhibitors, which block an enzyme that breaks down acetylcholine, have shown some effectiveness in improving the cognitive symptoms of Alzheimer's disease.

However, they have not been proven effective as a treatment for individuals with mild cognitive impairment (MCI), a condition that markedly increases the risk of Alzheimer's disease.

"We know that cholinesterase inhibitors can make a difference for Alzheimer's patients, so we wanted to find out if we could identify patients at risk for Alzheimer's who might also benefit from this treatment," said D.P. Devanand, MBBS, MD, professor of psychiatry, scientist in the Gertrude H. Sergievsky Center at CUMC, and co-director of the Memory Disorders Clinic and the Late Life Depression Clinic at NYSPI.

"Since odor identification tests have been shown to predict progression to Alzheimer's, we hypothesized that these tests would also allow us to discover which patients with MCI would be more likely to improve with donepezil treatment."

In this yearlong study, 37 participants with MCI underwent odor identification testing with the University of Pennsylvania Smell Identification Test (UPSIT). The test was administered before and after using an atropine nasal spray that blocks cholinergic transmission.

The patients were then treated with donepezil for 52 weeks and were periodically re-evaluated with the UPSIT and with memory and cognitive function tests.

Those who had a greater decline in UPSIT scores, indicating greater cholinergic deficits in the brain, after using the anticholinergic nasal spray test saw greater cognitive improvement with donepezil.

Also, short-term improvement in odor identification from baseline to eight weeks tended to predict longer-term cognitive improvement with donepezil treatment over one year.

"These results, particularly if replicated in larger populations, suggest that these simple, inexpensive strategies have the potential to improve the selection of patients with mild cognitive impairment who are likely to benefit from treatment with cholinesterase inhibitors like donepezil," said Dr. Devanand.

New Hope For Early Detection And Monitoring Of Alzheimer's Disease
A noninvasive eye scan helps in detecting key signs of Alzheimer's disease years before patients can show the symptoms of the disease.

Undescended Testicles
News Archive
News Resource
Advertisement
News Category
Milestone In Voluntary Blood Donation Achieved Samsung Reinvents Toilet for the Poor Which is a Better Form of Exercise: Daily or Weekly? First Phase of Foot-and-Mouth Disease Vaccination Shocking News: Polio Cases Return After a Decade in the US
More News
Sign up for Wellness Consult a Doctor Sign up for Selfcare

Daily Calorie Requirements How to Reduce School Bag Weight - Simple Tips Hearing Loss Calculator Turmeric Powder - Health Benefits, Uses & Side Effects Post-Nasal Drip Find a Doctor Indian Medical Journals Sinopril (2mg) (Lacidipine) Find a Hospital The Essence of Yoga
This site uses cookies to deliver our services. By using our site, you acknowledge that you have read and understand our Cookie Policy, Privacy Policy, and our Terms of Use