Written by Madhumathi Palaniappan
Medically Reviewed by The Medindia Medical Review Team on March 2, 2017 at 2:51 PM 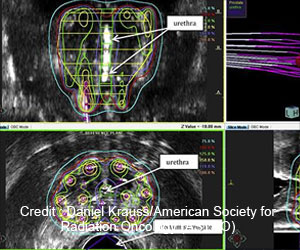 Brachytherapy involves the use of radiation to damage the DNA of cancer cells and destruct its ability to grow. A recent clinical trial found high-dose-rate of brachytherapy 19 Gray (Gy) treatment which is administered as a single, escalated dose to be safe and effective for the treatment of localized prostate cancer in men.

Prostate cancer is the most common cancer among men; It is found to be the second leading cause of death in men. Around one out of seven men were diagnosed with prostate cancer during their lifetime.


According to the American Cancer Society, around 161,360 cases of prostate cancer will be diagnosed in the United States in 2017.

Brachytherapy or the internal radiation therapy (RT), involves surgical insertion of the implants in or near the cancerous tissue to deliver radiation dose without affecting the healthy tissue.

Potential Targets for Drug Therapy for Drug Resistant Prostate Cancer Identified
Molecules in signaling circuit are potential targets for drug therapy in prostate cancer who are resistant to traditional methods of therapy.
Advertisement
This treatment reduces the exposure for treating prostate tumors surrounded by multiple critical structures, when compared to low-dose-rate (LDR) brachytherapy.

Low-dose brachytherapy implants are placed permanently inside the body and small doses of radiation are being delivered for over a period of months. While, the newly discovered high-dose rate brachytherapy implant is capable of delivering the dose in one treatment, after which the implant can be removed from the body.

High dose rate brachytherapy can be administered as about four to nine treatment sessions. These sessions may require multiple invasive procedures for inserting the implants.

The number of sessions can, however, be reduced, by increasing the dose, the data collected on the safety and tolerability of highly escalated brachytherapy are relatively new and limited.

The research team found that patients who receive a single dose of 19Gy HDR brachytherapy to experience similar outcomes along with LDR brachytherapy and were also found to have reduced number of visits.

Daniel J.Krauss, MD, radiation oncologist, Oakland University's William Beaumont School of Medicine in Royal Oak, Michigan, said, "It is becoming apparent that patients may be treated definitively for their prostate cancer in as little as a single day with a minimally invasive outpatient procedure." "We found that patients generally can resume normal activities the following day with typical side effects."

Research Study
A non-randomized and a prospective clinical trial of 58 patients between the age of 43 and 73, who had low or intermediate risk for prostate cancer was conducted with a median follow-up of 2.9 years.

After three years of treatment, the cancer control rates were favorable and the toxicity was also reduced. Three patients were found to experience recurrence or progression, with an estimated control rate of 93%

Seven patients were found to experience grade 2 urinary side effects which commonly includes frequency or urgency, these effects were found within six months after treatment with HDR brachytherapy.

Dr. Krauss, said, "This study illustrates that a potentially curative dose of radiation may be delivered safely to the prostate entirely in a single administration."

"Giving the entire dose in a single treatment theoretically could have had a greater negative impact on the normal tissues in close proximity to the prostate--meaning the bladder, urethra and rectum--but this was not found to be the case. Toxicity rates were extremely low, with essentially no major complications encountered in this initial group of 58 patients."

The study not only highlights the use of a single fraction of HDR brachytherapy for prostate cancer, but also specifies additional follow-up to compare long-term cancer control rates.

Dr. Krauss, said,"As the follow-up interval lengthens, 19 Gy dosing in a single fraction may or may not be sufficient to result in cure rates comparable to historical standards. One thing that this study has made clear, however, is that the extremely low toxicity and complication rates leave room to escalate the single fraction dose in subsequent trials."

"While additional study and longer follow-up are necessary to confirm the optimal dose for single-fraction HDR brachytherapy, we are optimistic that the single-treatment approach can eventually become a standard practice for prostate cancer treatment."

The radioactive implant is operated by a radiation oncologist, medical physicist along with a dosimetrist.

X-Ray
News Archive
News Resource
News Category
Death Caused by a Rare Type Amoeba: Research Study Japan Approves Smallpox Vaccine for Monkeypox Did Human Evolution Shrink Your Brain? What to Do When Your Asthma Medication Doesn't Work? Which is Better to Improve Smoker's Health  Cigarettes or E-Cigarettes?
More News
Sign up for Wellness Consult a Doctor Sign up for Selfcare