Shape of Prostate Could Be an Indicator of Cancer

Written by Dr. Meenakshy Varier
Medically Reviewed by The Medindia Medical Review Team on February 4, 2017 at 11:35 AM 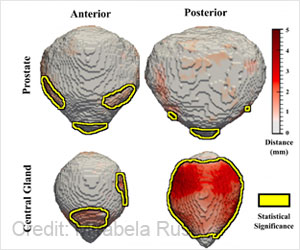 The shape of the prostate and a compartment within the gland called the transitional zone are found to differ in men with prostate cancer.

The preliminary computerized imaging reveals consistent differences in shape in comparison to those men without the disease.

New Combination Therapy for Men With Recurrent Prostate Cancer
Combining hormonal therapy with radiation treatment for prostate cancer significantly reduces the rate of metastases and death.
Advertisement
‘Using shape as a predictor of cancer could help in diagnosis of the disease or assess its aggressiveness. It will also help decide appropriate treatment. ’

According to new research led by Case Western Reserve University, the finding may provide a new avenue to diagnose the disease or even its aggressiveness.


"Looking at shape is a fundamental shift from looking at the intensity of pixels in an image to predict if a patient has prostate cancer," said Anant Madabhushi, F. Alex Nason professor II of biomedical engineering and leader of the research. "Pixel intensities vary, but shape is resilient."

Prostate Cancer Facts and Figures
Prostate cancer is a cancer that forms in tissues of the prostate. It is the second most common cancer in men worldwide. Read Medindia's facts on Prostate cancer.
Advertisement
"Here, we potentially have an image-based biomarker for prostate cancer, which is not greatly sensitive to the MRI parameters used by each institution, the maker of the MRI or the scanner itself, " Madabhushi said.

Based on 2011-2013 data, approximately 12.% of men will be diagnosed with prostate cancer during their lifetime.

The researchers reviewed the magnetic resonance imaging (MRI) scans of 70 patients from three different medical institutions in Ohio and two in Sydney, Australia.

To assess the differences in shape of the prostate gland, the researchers took images of 35 cancerous prostates, aligned them into a single frame and created a statistical shape atlas.

They then took images of 35 healthy prostates, aligned them in one frame and created a second statistical shape atlas.

The researchers then compared the sizes of prostate gland with cancer and a non-cancerous condition called benign prostatic hypertrophy which also increases the size of the gland.

On comparison of cancerous and cancer-free prostates, it showed clear, statistically significant differences in both the shape of the gland as well as the transitional zone.

Transitional zone is in the central part of the gland. It is surrounded by the peripheral zone.

The researchers found consistent differences in shapes between cancerous and cancer-free prostates.

In a paper published in the December issue of the Journal of Magnetic Resonance Imaging, Madabhushi and colleagues found prostate cancer caused significant changes in the shape of the prostate apex in the peripheral zone, while benign prostatic hypertrophy caused changes on the posterior side of the transitional zone for patients without cancer.

If the shape proves to be a reliable marker of cancer, it could be combined with radiomics. Radiomics uses computer algorithms to understand differentiating features in cancerous and non-cancerous tissues.

Researchers are working to identify radiomic features from the peripheral and transitional zones along with measurements derived from the prostate shape, which could be used as predictors of prostate cancer

The researchers are also trying to determine whether shape can be a predictor of the aggressiveness of cancer which will help in determining how the disease is treated.

The research is published in Scientific Reports.

Quiz on Prostate Cancer
Prostate cancer is fast gaining as a common cancer form among men; more threatening since its symptoms often go unnoticed until it's too late. This quiz tests your knowledge on prostate cancer, its diagnosis and treatment options and is as mandatory for men as the screening tests mentioned here are!

Drug - Food Interactions Daily Calorie Requirements Blood Donation - Recipients Find a Hospital Indian Medical Journals Accident and Trauma Care Noscaphene (Noscapine) The Essence of Yoga Turmeric Powder - Health Benefits, Uses & Side Effects Color Blindness Calculator
This site uses cookies to deliver our services. By using our site, you acknowledge that you have read and understand our Cookie Policy, Privacy Policy, and our Terms of Use