Second-hand Smoke Exposure Leaves a Mark In Women Before Conception

Written by Julia Samuel
Medically Reviewed by The Medindia Medical Review Team on January 6, 2017 at 1:57 PM 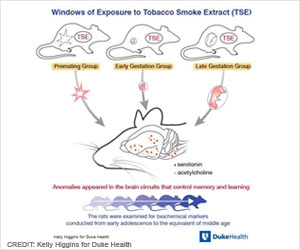 Tobacco smoke exposure even before conception appears to have a lingering impact that can later impair the brain development of a fetus, researchers at Duke Health report.

The smoke exposure damages regions of the brain involved in learning, memory and emotional responses. Although the impact was most severe with exposures occurring in late gestation, adverse effects on the fetuses' neuro-development occurred even when the mothers were only exposed prior to conception.

Cigarette Smoking - A Silent Killer
Smoking kills the smoker silently, pushing him towards serious illnesses, which slowly lead to death.
Advertisement
‘Exposure to tobacco smoke extract prior to conception, early gestation or late gestation was found to impair the function of brain circuits that govern learning, memory, mood and emotional behavior in offspring.’

"This finding has important implications for public health, because it reinforces the need to avoid secondhand smoke exposure not only during pregnancy, but also in the period prior to conception, or generally for women of childbearing age," said Theodore A. Slotkin, Ph.D., professor in Duke's Department Pharmacology & Cancer Biology.


Slotkin and colleagues, simulated secondhand smoke exposure by capturing and extracting the chemical compounds of tobacco smoke and administering the solution through implanted pumps in the laboratory animals.

Health Hazards of Smoking
Smoking causes many diseases and affects the overall health of smokers.
Advertisement
That process eliminated the stress of breathing smoke, which in itself can potentially impact fetal brain development, a factor that had confounded earlier studies on the effects of tobacco smoke.

Groups of female rats received the tobacco smoke extract during one of three periods: prior to mating, early gestation or late gestation. The researchers then studied the offspring starting in early adolescence and into adulthood, focusing on brain regions that are known to be adversely affected by nicotine and tobacco smoke.

Slotkin said,"We warn women about smoking during pregnancy, and most people are aware that secondhand smoke exposure is also harmful to the fetus, but our study is the first to show that exposure prior to conception is potentially damaging, as well. The public health implications should be obvious."

The findings show that exposure to tobacco smoke extract in all three of the study periods resulted in the offspring having impaired function of the cholinergic brain circuits that govern learning and memory, and of the serotonin circuits that affect mood and emotional behavior.

It is not known how the smoke exposure damages fetal brain development prior to pregnancy. The researchers said more study is needed, but potential causes include the lingering effects of some of the smoke components, which can remain in the body for several days after exposure.

They also suggested that the chemicals might change the mother rat's metabolism or hormonal status, or they could be causing an epigenetic alteration in the egg, which affects the activity of genes that control brain function.

"Our study clearly shows there is no stage in which tobacco smoke is innocuous to the developing fetus," Slotkin said.

A prior study from the same team found a substantial portion of the tobacco smoke effect resulted from the nicotine in the smoke. That finding suggests that e-cigarettes could also represent a significant hazard for women of childbearing age.

Smoking among Women
Tobacco use in women is on the rise. The health risks of tobacco are far too many has never done a woman any good psychologically or health-wise.

Antioxidants to Help You When You Quit Smoking
Smoking is injurious to health, but it sure is a tough addiction to stop. Cure yourself with the power of antioxidants to eliminate health risks such as lung cancer and dental problems.