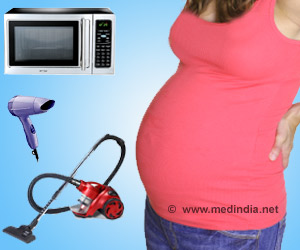 A study led by Dr. De-Kun Li, a reproductive and perinatal epidemiologist at the Kaiser Permanente in Oakland, California USA, claims that children of  pregnant women who have been exposed to magnetic energy emnating from electrical items such as hair dryers, microwaves and vacuum cleaners have a greater risk of developing asthma.

The study has been  published in the online Journal - Archives of Pediatrics & Adolescent Medicine.  It is the first to  link maternal exposure to magnetic energy and  asthma in children.

Previous Studies - There have been earlier studies that have linked exposure to magnetic energy (generated by common sources such as power lines and electrical appliances) to miscarriage, poor semen quality, immune disorders and cancer.

Various other studies pointed fingers at microwaves ovens, hair dryers and vacuum cleaners. However, these studies lacked consistency, as they required to be carried out over a long period of time.

For the recent  prospective study, De-Kun Li and his group of researchers  examined the daily magnetic field exposure of 801 pregnant women who resided in Northern California.

The scientists then analyzed the medical records (for 13 years) of the children born to these women, to check for asthma.

During their pregnancy the  subjects wore on their person a small monitor for 24 hours to record their magnetic field exposure from daily household items such as  microwaves, fans, coffee grinders, hair dryers, vacuum cleaners, and fluorescent light bulbs, transformer stations and power lines.

"In this study we observed a dose-response relationship between mother's MF (Magnetic Field) level in pregnancy and the asthma risk in her offspring.In other words, a higher maternal MF exposure during pregnancy led to a higher risk in offspring." Dr De-Kun Li  said.

Although Li said it is not very clear about the connection between exposure to power lines and asthma, he mentioned that prior studies by his team established a link between high exposure to electromagnetic fields and risk of miscarriages.

He also said that some animal studies indicated that electromagnetic field exposure can affect immune response, which could in turn predispose a person to asthma.

He recommended that pregnant women minimize their exposure to known magnetic field sources .

"That's a striking figure. That magnitude of association we don't see very often. If it was correct, and that's a big 'if,' that would be really startling" says David Savitz, PhD, a professor of community health and obstetrics and gynecology at Brown University in Providence

Savitz, said that unlike cigarette smoke or lead, there's little evidence that low-frequency EMFs (such as those measured in the study)  are harmful.Therefore there is no need to give up using appliances such as air dryer just yet.

But Savitz and others recognize the importance of this research. "There are a lot of important topics that started out looking pretty flaky and pretty unlikely. There was a time when it made no sense that  smoking could be bad for you," he remarks as other experts agree.

"The study appears to be well executed and the finding is surprising," says Jonathan M. Samet, MD, a pulmonologist and epidemiologist of the Keck School of Medicine at the University of Southern California in Los Angeles.

It must be remembered that Samet recently led a World Health Organization panel that came to the conclusion that EMFs from cell phones and other wireless devices could be carcinogenic.

De-Kun Li's study did not monitor exposure to higher frequency electromagnetic fields that are generated by mobile phones or mobile phone towers.

The study has drawn plenty of criticism too.

Professor of Paediatric Epidemiology at the University of Leeds, Patricia McKinney, said the study had several flaws.

"The investigation lacks a biological basis or hypothesis to test; papers cited in support of possible adverse effects of EMF (electromagnetic fields) on reproductive outcomes and the immune system are selective and ignore the major reviews which have concluded that the findings fail to provide a sufficiently strong case for any further investigation of this topic," McKinney  said.

"Crucially, we cannot determine how representative the sample was - an important factor in epidemiological studies as this selection bias may have been linked to mothers who were more heavily exposed to EMF or likely to have children with asthma," McKinney added.

Visiting professor at University of Southampton, professor William Stewart observed that the  study had several weaknesses in the way it measured magnetic fields and believed that the findings could be categorized as  pure "chance".

The above topic has always been controversial and Li's study has suggested that there could be some connect between magnetic fields and human health.

De-Kun Li understands the need for more research to confirm his findings. This, he believes, would help in bringing out new strategies in dealing with the chronic disease, Asthma.

It''s a lung condition characterized by inflammation of the bronchi and constriction of the airways that result in coughing, wheezing or breathlessness. Allergy and other airway irritants can trigger it

Come winter and asthma is back with renewed vengeance. With air pollution ever on the rise and our everyday surroundings abounding in common allergens, it's best to stay informed on this respiratory condition so that you don't trigger off another ...

Cell Phones and Cell Towers - Are They Transmitting Death?

Anemia is the commonest blood disorder that may occur in pregnancy and is usually due to low iron or folate reserves of the body and this is reflected as anemia.

Breech birth or presentation is delivery of the fetus in a bottom or foot-first position. Causes of breech presentation include premature labor, uterine malformations and fetal abnormalities.

Nocturnal leg cramps are painful muscle contractions, which occur in the calf, foot or thigh muscles at night.

New research indicates that too much stress could lead to miscarriage. What are the risk factors to avoid? Read on to know more!