Written by Madhumathi Palaniappan
Medically Reviewed by The Medindia Medical Review Team on March 7, 2017 at 5:48 PM 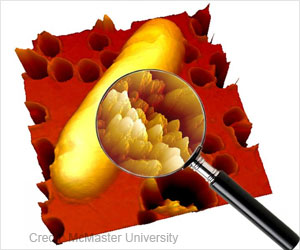 The discovery of an effective combination drug therapy is a new way to treat superbugs, the world's worst infectious disease, finds a research team from McMaster University.

According to the World Health Organization, drug-resistant infections are considered as a critical priority due to their threat to human health.

Drug Resistance - Antibiotic Resistance
Drug resistance is often a problem in malaria, tuberculosis, HIV, sexually transmitted diseases and hospital acquired diseases. Judicious use of antibiotics can control the problem.
Advertisement
‘Use of pentamidine drug along with other antibiotics may help to treat antibiotic drug resistance.’

The research study was published in the journal Nature Microbiology.


Eric Brown, senior author, professor of biochemistry and biomedical science at McMaster's Michael G.DeGroote School of Medicine, scientist of the Michael G.DeGroote Institute for Infectious Disease Research, said, "We looked for compounds that would mess with these bacteria, and I think we're nailing it."

Infographics on Drug Resistance / Antibiotic Resistance
Drug resistance is often a problem in malaria, tuberculosis, HIV, sexually transmitted diseases and hospital acquired diseases.
Advertisement
The research team focused on Gram-negative bacteria that is resistant to antibiotics including the drugs such as colistin, which may lead to wound, pneumonia and blood stream infections.

Feature of Gram Negative Bacteria
The research team tested around 1440 off-patent drugs to compromise that barrier in the superbugs.

Brown, said, "These pathogens are really hard nuts to crack, but we found a molecule that shreds that shell and allows antibiotics to enter and be effective."

Gram Negative Bacteria has an intrinsically impenetrable outer shell which may be a barrier to other effective antibiotics. This may make infections deadly.

The scientists discovered an antiprotozoal drug called pentamidine which may disrupt the cell surface of even the resistant strains of the Gram-negative bacteria.

Antifungal medication may be particularly potent when used along with antibiotics against multidrug resistant bacteria.

The drug was found to be effective against the two of the three pathogens namely Acinetobacter baumannii and enterobacteriaceae identified by WHO having the most critical priority for developing new antibiotics.

The combo therapy may also have an impact on the third critical bacteria, Pseudomonas aeruginosa.

The discovery may be found to be effective in the lab and mice. More work is required to offset potential side effects and ensure human safety. The author also added that the lab is continuing to test more compounds as well.

Pentamidine Drug
Pentamidine belongs to a class of medications called antiprotozoals. They mainly act by stopping the growth of the protozoa especially Pneumocystis carinii which can cause pneumonia.

Antibiotic Resistance May Threaten Public Health
Antibiotic resistance is a serious life threatening condition that is found to affect millions of people.

Drug - Food Interactions Noscaphene (Noscapine) Nutam (400mg) (Piracetam) Sanatogen Daily Calorie Requirements Accident and Trauma Care Hearing Loss Calculator Sinopril (2mg) (Lacidipine) The Essence of Yoga Iron Intake Calculator
This site uses cookies to deliver our services.By using our site, you acknowledge that you have read and understand our Cookie Policy, Privacy Policy, and our Terms of Use  Ok, Got it. Close
×