Nutritional supplements in appropriate doses can help treat the four most common mental disorders - major depression, bipolar disorder, schizophrenia and obsessive compulsive disorder (OCD), according to a study published in the Nutrition Journal as well as a number of other studies done over time. 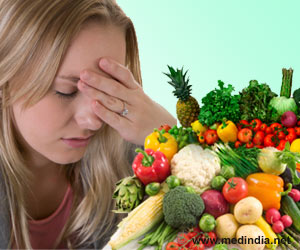 Normally, mental disorders are treated using pharmaceutical drugs. Although these drugs are highly effective, some of them come with severe side effects. For example, lithium that is used in the treatment of bipolar disorder causes side effects such as weight gain, increased thirst and urination, muscle weakness, hand tremors, hair loss, impaired memory, drowsiness and decreased thyroid function.

So, what does nutrition have to do with mental depression? 'The brain is a chemical factory that produces serotonin, dopamine, norepinephrine, and other brain chemicals 24 hours a day. The only raw materials for their syntheses are nutrients, namely, amino acids, vitamins, minerals, essential fatty acids, etc. If the brain receives improper amounts of these nutrient building blocks, we can expect serious problems with our neurotransmitters,' explains Dr Rima Laibow from Natural Solutions Foundation.

For example, omega-3 and omega-6 are essential fatty acids that are obtained through diet. Omega-6 leads to production of arachidonic acid and eicosanoids which promote inflammation, platelet clotting and production of prostaglandins. Omega-3 produces eicosapentaenoic acid (EPA) and docosahexaenoic acid (DHA) that possess anti-inflammatory properties and decrease platelet stickiness. When the proportion of omega-6 becomes 20 times that of omega-3, DHA depletes causing a change in neurotransmitter receptors leading to dysregulation of serotonins. In other words, omega-3 helps the brain to transmit signals that enable proper thinking, moods and emotions.

According to Dr Jerry Cott, a senior pharmacologist at the FDA Center for Drug Research and Review, countries in which individuals consume a large amount of fish are at lower risk for mental disorders such as major depression. This is because fish and fish oil contain high levels of omega-3 fatty acids.

Shaheen Lakhan and Karen Vieira from the Global Neuroscience Initiative Foundation, Los Angeles, reviewed the available literature on nutritional therapies for mental disorders focusing on the nutritional deficiencies that are associated with mental disorders and outlined how dietary supplements can be implemented in the treatment of four most common mental disorders: major depression, bipolar disorder, schizophrenia, and obsessive compulsive disorder (OCD).

This is what they came up with:

Major depression - Caused by a combination of stress, genes and temperament, major depression is a disorder that has symptoms viz. bad moods, sleeping problems, increased sadness and anxiety, loss of appetite and loss of interest in daily activities. In addition to omega-3, vitamin B (folate) and magnesium deficiencies are also linked to depression. Clinical trials and case studies show that 0.8mg of folic acid per day or 0.4mg of vitamin B12 per day or 125mg to 300mg of magnesium helps reduce depression symptoms.

Bipolar disorder - This disorder is characterized by debilitating depression, uncontrollable mania or a manic and depressive episode. Biochemical abnormalities include excess vanadium and acetylcholine, taurine (amino acid that plays a role in the brain by eliciting a calming effect) deficiency, omega-3 deficiency, and vitamins B and C deficiency. Vitamin C has been shown to protect the body from the damage caused by excess vanadium. A controlled study revealed that a single 3g dose of vitamin C could significantly decrease manic symptoms. Other studies show that 1 to 2 grams of omega-3 fatty acids in the form of EPA added to one's daily intake decreases manic/depressive symptoms. Interestingly, studies have shown that taurine can be used as an alternative to lithium (prescription medication for bipolar disorder). This is because taurine blocks the effects of excess acetylcholine that contributes to bipolar disorder.

Schizophrenia - It is a mental disorder characterized by abnormalities in the perception or expression of reality. It most commonly manifests as hallucinations, paranoia, delusions, and speech / thinking impairments. Studies have shown that EPA, which is found in omega-3 fish oils, can be used to treat schizophrenia. Trials reveal that 2g of EPA taken daily in addition to one's existing medication effectively decreases symptoms in schizophrenic patients.

Obsessive-Compulsive disorder - OCD is an anxiety disorder which causes recurrent, unwanted thoughts (obsessions) and / or repetitive behaviors (compulsions), which are repeated in an uncontrollable manner as a means of repressing the stressful thought. Selective serotonin reuptake inhibitors (SSRIs) are known to help patients with OCD. A supplement called Amoryn with St. John's wort as its main ingredient, has been shown to help OCD patients better deal with their obsessions and compulsions.

The results depict that nutritive supplements can be effective treatments for mental disorders.

'Proper medical diagnosis and a clear description of all possible treatment options should always be the first plan of action when treating mental disorders. However, the final decision on whether or not to try nutritional supplements as a treatment must be based on the patient preferences'.

'Those with influence in this field should continue to examine natural treatments on the scientific level in order to increase the availability of grant money for this type of research'.

'Psychiatrists treating patients with mental disorders should be aware of available nutritional therapies, appropriate doses, and possible side effects in order to provide alternative and complementary treatments for their patients'.

Comments should be on the topic and should not be abusive. The editorial team reserves the right to review and moderate the comments posted on the site.
scottandrew65

Great !I've been searching google for several hours looking for relevant info on this.Thanks for sharing.

Learning this information is mind-altering for me. I am excited to implement the dietary changes and see if I can feel any results. I also love to tell people about what I have learned about in the way of scientific discoveries.

Medindia presents a refresher course for those who wish to pursue PG distance education. This page deals with criteria for major depression in managing pshyciatric disorders in primary care.

Obsessive-compulsive disorder is an anxiety disorder in which people have persistent, upsetting thoughts (obsessions) and/or repetitive behaviours (compulsions).

Schizophrenia is a mental disorder characterized by symptoms of thought, behavior and social problems.

Somatic symptom disorder is said to occur when a persons focus, feelings and behavior related to physical symptoms is excessive and affects normal functioning.