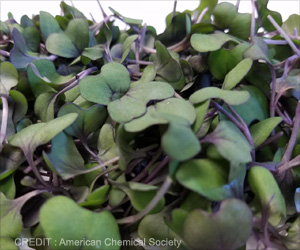 
Red cabbage microgreens help lower the risk of cardiovascular disease and reduces weight gain in mice fed with high-fat diet, according to a recent study published in the ACS' Journal of Agricultural and Food Chemistry.

Microgreens are tender, immature plants and herbs that take only a week or two to grow before they're ready for harvesting. Microgreens are sprouting up everywhere from upscale restaurants to home gardens. They help spruce up old recipes with intense flavors and colors, and are packed with nutrients.

A growing body of research suggests that microgreens could offer more health benefits than their mature counterparts. Previous studies have shown that full-grown red cabbage can help guard against excessive cholesterol. So, Thomas T.Y. Wang and colleagues wanted to see if red cabbage microgreens might have a similar or even greater effect than their larger counterparts.


For the study, researchers used 60 mice that were a model for obesity and these animals also tend to develop high cholesterol and other risk factors for cardiovascular disease. The team divided these mice into different diet groups. They received food low in fat or high in fat, and with or without either red cabbage microgreens or mature red cabbage.

Both the microgreens and mature cabbage diets reduced weight gain and levels of liver cholesterol in the mice on high-fat diets. But the study also showed that microgreens contained more potentially cholesterol-lowering polyphenols and glucosinolates than mature cabbage. The baby plants also helped lower LDL, or "bad," cholesterol and liver triglyceride levels in the animals.