Silkworms might be used to repair damaged eardrums in the future. A device that incorporates silk in an ear implant has been developed by research teams based in Perth and Melbourne.

The device named "ClearDrum" looks like a contact lens on which the patient's cells can grow. The research teams are moving towards the clinical trials of ClearDrum.
Now Silkworms to Repair Damaged Eardrums


Silk was the preferred choice because it was flexible, said Professor Marcus Atlas, Perth-based surgeon.


‘ClearDrum is a bio-compatible ear implant made of silk. The implant allows the patient's own cells to grow over the top, repairing the damaged eardrum.’


"We felt that it had shown previously to support cell growth and proliferation, and the ability to be able to change into various forms was a really appealing thing for us, particularly when we started to mix it with other products to create different mechanical and acoustic criteria," said Professor Atlas.

How is Silk used to Make ClearDrum?

The silk is degummed (removal of the sticky substance called sericin). The derivative fibroin, a protein present in the silk is then heated into a liquid and combined with glycerol and polyurethane to create a scaffold.

The cells called keratinocytes, migrate and move across the scaffold, which helps the healing process. The ClearDrum is the first implant that mimicked a human ear drum.

As the name suggests, ClearDrum is transparent. ClearDrum can improve patient's hearing as it can transmit the sound better.

"We saw that silk had this ability to become a really strong biological membrane that would support cell growth," said Professor Atlas.

Chief Executive of the Ear Science Institute Sandra Bellekom, said, "We used silk because we know that it works. It needed to be strong and flexible with acoustic properties and preferably transparent."

For years, surgeons around the world had been harvesting tissue for eardrum perforations and many organizations have been trying to develop a suitable device for the ear, said Bellekom.

"We have extensively researched our technology over the past decade, and we've been able to produce 34 peer-reviewed journal articles which attest to the quality of our science. But the real truth of the matter is in translating that into human patients."

A clinical trial of ClearDrum is set to happen with the grant of nearly $4 million from the UK-based charity, the Wellcome Trust. Patients with chronic middle ear disease (active or inactive) will be recruited for the trial. The study group will involve patients with both simple and complex perforations. 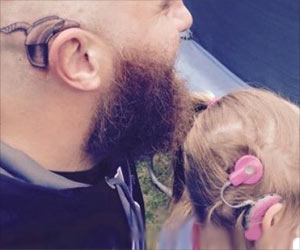 Alistair Campbell Gets a Cochlear Implant Tattoo As a Tribute to His Daughter
Alistair decided to ink art an image of cochlear implant on his head for his six year-old deaf daughter who underwent the implant surgery recently.
READ MORE

Britains First Cochlear Implant Performed
Doctors in Southampton successfully conducted Britain's first cochlear implant which could help people who are deaf to hear in both their ears.
READ MORE