Written by Hannah Joy
Medically Reviewed by The Medindia Medical Review Team on December 7, 2017 at 8:11 PM 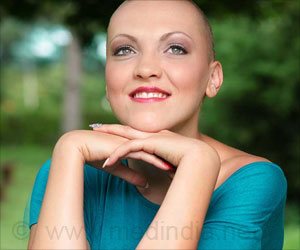 A new treatment strategy has been developed that could increase survival rates for the patients who have uterine cancer, reveals a new study.

Tumour-targeting nanoparticles can be loaded with a drug that makes tumor cells vulnerable to chemotherapy's toxicity. This is the new treatment for endometrial cancer.

Uterine Cancer
Uterine Cancer or Cancer of the Uterus (or Endometrial Cancer) refer to cancers affecting the uterus or the womb in women. Learn about the different types of uterine cancer, symptoms, staging, diagnosis, prognosis, treatment, survival rates and news on uterine cancer.
Advertisement
‘Nintedanib drug used to target tumor cells with the Loss of Function p53 mutation can suppress the life cycle of tumor cells and make them more resistant to the lethal effects of chemotherapy.’

Combining both traditional chemotherapy and the new cancer drug into tiny nanoparticles can create an effective lethal cancer treatment. The super-lethal nanoparticles were found to reduce tumor growth and have increased the survival rates of the disease, revealed a researcher.


Kareem Ebeid, a graduate student at the University of Iowa and a lead researcher, said, "For the first time, we were able to combine two different tumor-targeting strategies and use them to defeat deadly Type II endometrial cancer. We believe this treatment could be used to fight other cancers, as well."

Choriocarcinoma in Females
Choriocarcinoma is a rare uterine cancer following pregnancy. The tumor arises in the trophoblast cells lining the embryo. Vaginal bleeding is a common symptom.
Advertisement
The research team combined two anti-cancer drugs such as paclitaxel and nintedanib, or BIBF 1120, which were given to the mice with Type II endometrial cancer.

Paclitaxel is a type of chemotherapy medication used to treat endometrial cancer. Nintedanib or BIBF 1120 is a new drug, which is used to restrict tumor growth in the blood vessels.

The study was published in the journal Nature Nanotechnology.

Combination of Drugs in Treatment

Nintedanib drug was used to target tumor cells that have a specific mutation that is known as Loss of Function p53, which interrupted the regular life cycle of tumor cells and made them more resistant to the lethal effects of chemotherapy.

Paclitaxel chemotherapy drugs killed tumor cells when they were still in the process of cell division. However, the process slows down with the Loss of Function p53 mutation and making the cancer cells more resistant to the chemotherapy.

On the other hand, nintedanib attacked tumor cells with the Loss of Function p53 mutation and forced them to divide where they can be quickly killed by chemotherapy.

"We are taking advantage of the tumor cells' Achilles heel--the Loss of Function mutation--and then sweeping in and killing them with chemotherapy," Ebeid said.

The novel approach can also be used to treat other cancers like ovarian and lung cancers, which carry the Loss of Function p53 mutation, revealed the research team.

What is Uterine Cancer?

Uterine cancer or endometrial cancer is cancer of the womb, and its most common symptom is vaginal bleeding. Treatment and prognosis of uterine cancer depend on the stage of the disease and also the health status of the patient.

Benign growths within the uterus are most often fibroids. They commonly occur in peri-menopausal women, in their forties.

Fibroids usually go away on their own, but if they produce symptoms like vaginal discharge or heavy bleeding, they can be removed laparoscopically.

Endometriosis is another benign disease affecting the uterus. There are different types of uterine cancers depending upon the region that is affected.

The most common type of uterine cancer is 'cancer of the endometrium' which is why uterine cancers are also referred to as endometrial cancer by some.

A combination of methods including physical examination, PAP smear, ultrasonography and biopsy of uterine tissue helps in establishing the diagnosis of uterine cancer or to confirm it.

Treatment and prognosis of Uterine cancer depend on the age and the health status of the patient and also on the stage of cancer and the rate at which the disease progresses in the patient.

Tattoos A Body Art
News Archive
News Resource
News Category
Death Caused by a Rare Type Amoeba: Research Study Japan Approves Smallpox Vaccine for Monkeypox Did Human Evolution Shrink Your Brain? What to Do When Your Asthma Medication Doesn't Work? Which is Better to Improve Smoker's Health  Cigarettes or E-Cigarettes?
More News
Sign up for Wellness Consult a Doctor Sign up for Selfcare