Written by Madhumathi Palaniappan
Medically Reviewed by The Medindia Medical Review Team on April 29, 2017 at 2:44 PM 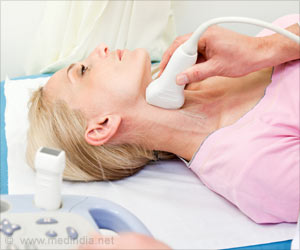 A newly designed prognostic tool may help to predict the recurrence of parathyroid cancer and enables physicians to identify the patients who are at a higher risk.

The diagnostic tool may also help to determine the optimum postoperative strategy which may include aggressive surveillance and additional treatments.

Hyperparathyroidism
Hyperparathyroidism is a condition characterized by excess parathyroid hormone, caused by overactivity of at least one of the parathyroid glands in the neck.
Advertisement
‘New prognostic tool may help to predict the recurrence of parathyroid cancer and enables the physicians to identify patients who are at high risk.’

The study results were published online in the Journal of the American College of Surgeons.


A cancerous growth in the parathyroid gland may cause a rare type of cancer called parathyroid cancer. There is no definitive cure, however, diagnosing cancer at an earlier stage would help to treat devastating cancer without spreading the tumor cells to the surrounding tissue.

Thyroid Cancer
"Shaped like a butterfly she sits within the neck," that's what an anonymous poet wrote about the thyroid gland but it can become cancerous and spread to other parts.
Advertisement
Angelica Silva-Figueroa, MD, Oncological Surgeon, Head and Neck Surgeon at RedSalud Avansalud Clinic, Chile, said, that more than half of the patients would develop a recurrence after their first surgical procedure.

"Currently there has been no reliable system to predict who will recur. What is needed is a prognostic staging system for parathyroid cancer. We do not know which group of patients has an increased risk of relapse at the time of diagnosis," Dr. Silva-Figueroa said.

Research Study
The researchers examined the data collected from parathyroid cancer patients between 1980-2016 at the University of Texas MD Anderson Cancer Center, Houston.

26 patients from a sample size of 68 patient records were found to develop recurrent disease after a period of 4.6 years.

The research team evaluated the recurrence-free survival rates after the initial operation to remove the tumor. The results were found to be 85% at one year, 67% at the second year and 51% at 10 years.

"This [approach] offers a means to stratify patients and consider more aggressive adjuvant treatment for those at higher risk of recurrence."

Parathyroid cancer patients had significantly elevated levels of calcium in the blood, and other abnormal parathyroid hormone levels.

By combining the variables, the research team developed a simple tool to predict parathyroid cancer.

Patients were divided into three risk groups - low, moderate and high based on the adverse effects, which were ranged from zero to three.

The research team also showed that the risk of recurrence is greater within the two years after the surgical procedure. The risk may continue to increase over the next 10 years and later in the moderate risk group, said, Dr. Silva-Figueroa.

The investigators also showed that, although the risk of recurrence is greater within two years after the initial surgical procedure. This risk continues to increase over the next 10 years and beyond in the moderate risk group.

The risk of the patient could be assessed by the combination of measurable and available information. The individuals are at an elevated risk, additional surgery or other adjuvant therapies could help to control cancer recurrence.

Dr. Silva-Figueroa, said, "We believe that this scoring system is the first step in personalized cancer care."

Validation of the Prognostic Scoring System
The prognostic scoring system has been currently validated at the four centers across the country. One of the studies has been completed and the results are also published.

This tool may be made available for public use.

David Winchester, MD, FACS, Medical Director of Cancer Programs at American College of Surgeons, "This article is an important contribution to the medical literature and should be employed for other rare tumors where data are insufficient to generate prognostic stages."

"It's a good model to pave the way for future studies."