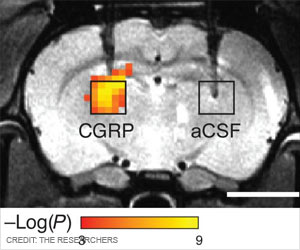 A new sensor that would help researchers get a view of the molecules that control brain activity has been developed.

This new probe does not used chemicals or radioactive labels.


The major drawbacks of the currently used radioactive probes are-
The research team led by Alan Jasanoff, an MIT professor of biological engineering and his colleagues are the pioneers in developing the new sensors.


‘The new probe allows researchers to image the molecules that control the brain activity without the use of chemicals or radioactive labels.’


The new sensors consists of proteins designed to detect a particular target, which causes them to dilate blood vessels in the immediate area. The dilation produces a change in blood flow that can be imaged with magnetic resonance imaging (MRI) or other imaging techniques.

"This is an idea that enables us to detect molecules that are in the brain at biologically low levels, and to do that with these imaging agents or contrast agents that can ultimately be used in humans," Jasanoff says. "We can also turn them on and off, and that's really key to trying to detect dynamic processes in the brain."

The probes were used to detect enzymes called proteases.

Scientists want used these probes to monitor the activity of neurotransmitters, which act as chemical messengers between brain cells.

To make the probes, the researchers modified the peptides in such a way that they are trapped within a protein cage preventing their from interacting with blood vessels.

When the peptides detect proteases in the brain, the proteases cut the cages open and the CGRP interacts with the surrounding vessels causing them to dilate.

Using techniques like MRI to image the dilation, allows the researchers to determine where the proteases were detected.

"These are molecules that aren't visualized directly, but instead produce changes in the body that can then be visualized very effectively by imaging," Jasanoff says.

Proteases are sometimes used as biomarkers to diagnose diseases such as cancer and Alzheimer's disease.

Researchers are currently working using this imaging technique to monitor neurotransmitters, such as dopamine and serotonin, that are critical to cognition and processing emotions.

"What we want to be able to do is detect levels of neurotransmitter that are 100-fold lower than what we've seen so far. We also want to be able to use far less of these molecular imaging agents in organisms. That's one of the key hurdles to trying to bring this approach into people," Jasanoff says.

This can be done by engineering cells so that the gene for CGRP is turned on at the same time that a gene of interest is turned on.

Scientists could use the CGRP-induced changes in blood flow to track which cells are expressing the target gene, which could help them determine the roles of those cells and genes in different behaviors.

"Many behaviors involve turning on genes, and you could use this kind of approach to measure where and when the genes are turned on in different parts of the brain," Jasanoff says.

Researchers are working on delivering peptides without injecting them. This means they should look for ways to get them to pass through the blood-brain barrier. This barrier separates the brain from circulating blood and prevents large molecules from entering the brain.

The paper's lead authors are postdoc Mitul Desai and former MIT graduate student Adrian Slusarczyk and it appears in the December 2 issue of Nature Communications.

Functional Brain Imaging can Help in Training Brain Patterns of Empathy
For the first time, researchers have demonstrated that it is possible to train brain patterns associated with empathic feelings such as tenderness.
READ MORE

Brain Changes Needs To Be Retrained After ACL Injury
A new study shows parts of the brain associated with leg movement lagged during recovery from an anterior cruciate ligament (ACL) injury.
READ MORE