Written by Sheela Philomena
Medically Reviewed by The Medindia Medical Review Team on December 15, 2016 at 6:53 PM 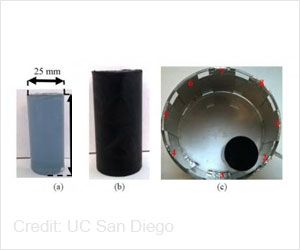 A novel non-invasive method to detect infections in prostheses used for amputees, as well as for knee, hip and other joint replacements has been developed by University of California San Diego engineers.

"By contrast, our method could be easily used in a doctor's office or in the home and, potentially, provide quantitative diagnostic-relevant information about the extent and locations of the infection." said Ken Loh, a professor of structural engineering at the Jacobs School of Engineering at UC San Diego and the lead researcher on the project.


To detect the health of the sample (i.e. tissues, bone or prothesis), an algorithm was designed to process the measurement data to allow the physicians to reconstruct a predetermined area's electrical properties. Prosthetic infections can cause changes in the electrical field which can be detected via ECT. The algorithm was further improved by Loh and Ph.D. student Sumit Gupta to make it more accurate.
Advertisement
A thin-film sensor made of a conductive polymer matrix that is sensitive to pH was sprayed onto the prostheses to improve the imaging technique's ability to detect infection or other issues occurring in the tissue or prosthesis.

"This is a new modality of sensing that hasn't been widely used to detect infection before," Loh said.

To test the working of their new system, the research team used a spray-coated plastic rod as a surrogate of an actual prosthesis along with a thin-film sensor.

The rod was exposed to several solutions that changed its pH.

After each exposure to a solution, they used their prototype system to scan the rod to obtain electrical measurements for their ECT algorithm.

The method successfully detected the location of the rod and a change in the rod's electrical properties due to changes in pH.

"The combination of these two techniques makes our method optimal and, potentially, highly sensitive to different complications related to these prostheses and implants," Loh said.

Loh added: "Next steps would include refining the measurement setup and to conduct animal testing, which is about three years out".

The research team presented their findings at the 6th Asia Pacific Workshop on Structural Health Monitoring in Hobart, Tasmania, Australia.

PJIs occur in the wound or deep around the artificial implants. Infections are caused by bacteria.

Less than 10% of prosthesis recipients develop implant-associated complications during their lifetime.

3-D Printed Prosthetic Hand is Now Affordable
The nice thing about 3D printing is that the price only has to do with the amount of plastic used, ....

First Prosthetic Foot for High Heels
Prominence would be the first prosthetic foot on the market that is not custom made but adapts to .....