Written by Madhumathi Palaniappan
Medically Reviewed by The Medindia Medical Review Team on December 2, 2016 at 10:25 AM 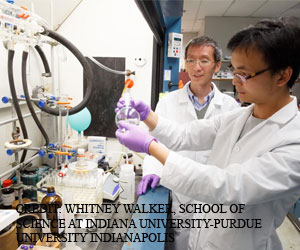 New Molecular binding technique was devised by a team of researchers from the School of Science at Indiana University-Purdue University Indianapolis (IUPUI) to speed up the drug discovery process.

A drug may be a chemical substance prescribed by a doctor for diagnosis, treatment and prevention of the disease.

New Method Developed to Predict Limit to Which the Skin Could be Stretched
The toughness of skin varied significantly in relation to its water content. Dry skin was found to be brittle and easier to break than hydrated skin.
Advertisement
‘Drug analogues can be quickly synthesized using the new method.’

The IUPUI Chemists have designed the new method to shorten the human and animal drug discovery and development process in a more economical and eco-friendly manner.

Scientists Develop Method to Promote Sensory Hair Cell Regeneration in Inner Ear
Embryonic stem cells have the potential to become any cell type, which is used as a source for regenerating lost inner ear hair cells.
Advertisement
The new method used for synthesizing drugs have only fewer steps when compared to old methods and is found to be useful to develop second generation drugs.

About 75% of compounds with medicinal value contain Nitrogen atom and this method can be widely used for the production of compounds containing nitrogen.

Haibo Ge, associate professor, Yongbing Liu of the School of Science at IUPUI, said,"Having fewer steps and simpler chemical ingredients, as our method does, has potential benefits both for the pharmaceutical industry and for patients. Our study showed that our technique is an advancement over the currently used method."

"While we are still at an early stage, it appears that in addition to improving the process of synthesizing molecules, our improved method makes that process more economical by saving time and labor. As it is "atom efficient," there is less waste needing disposal," he added.

The new method was used by the research team to develop fingolimod drug to treat relapsing forms of multiple sclerosis.

Partha Basu, chair and professor of chemistry and biological chemistry at IUPUI, said "Hydrocarbons -- compounds made out of carbon and hydrogen or having a carbon-hydrogen bond -- are used in daily life all the time - from clothes to toothbrushes."

"These compounds are generally stable and do not react easily with common chemicals. Transformation of one hydrocarbon to another is of immense interest for developing new materials, from drugs to energy storage."

"But making such transformation in a selective way has been a challenge for more than a century. This is what Dr. Ge did using a simple but efficient process that requires fewer steps. This simplicity makes the chemistry unique, and it can have a lasting impression in the field of C-H bond activation," he added.

Exploring Nature's Vast Array of Venoms for Drug Discovery
Venoms are attractive from a drug development perspective because they tend to hit their targets on cells with very high potency and selectivity.