Written by Julia Samuel
Medically Reviewed by The Medindia Medical Review Team on December 7, 2016 at 5:49 PM 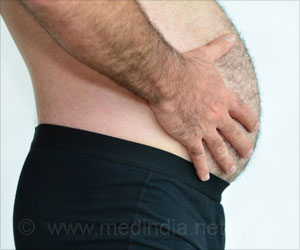 Obese mice fed with a small molecule that boosts metabolism may help combat obesity as it prevents weight gain and increases fat loss.

The molecule was recruiting the help of a body's own genes in countering the effects of a high-fat diet. The research team conducting the study believe that their findings may provide a new unexplored therapeutic approach to fighting excessive weight gain in cases where diets or exercise have no effect.

Losing Fat Aesthetically: Inch Loss and Body Toning
Body therapies give the body a better shape and toned look and not just random fat loss. They are like passive exercise. The fat sitting deep within is mobilized and utilized from problem areas.
Advertisement
‘Blocking SRSF1 with a compound promotes gene expression of the protein that burns calories and prevents fat gain in mice.’

A high-fat diet may contribute to obesity in some individuals. Treatment in such situations has focused on behavioral changes, which is highly challenging to achieve for the general population on a long term basis. This study introduces the concept of recruiting the help of our genes in countering the effects of a high-fat diet, instead of focusing on reducing the intake of high-fat food.


"Dietary management and exercise are not always successful as an intervention for obesity, underscoring the need for efficient medication to treat metabolic disorders," adds Lopez-Herrera, who believes that this treatment represents an as yet unexplored approach to treat obesity.

Fat-Burning Foods for Men
What are the best fat-burning foods? Some vegetables like spinach, mushrooms; certain nuts, legumes and lentils help burn fat.
Advertisement
Researchers know that the structure of some genes that help to produce certain proteins can actually change when someone constantly eats too much high-fat food. In the process, the person can become overweight or obese, or develop other lifestyle-related metabolic disorders such as diabetes or heart problems. In many cases, the same gene can produce two or more alternate proteins, based on how the translation from DNA (gene) to proteins is processed.

One of these genes is lamin A and lamin C (LMNA), which plays a role in the development of different metabolic disorders. The LMNA RNA, which is the genetic material resulting from a process called DNA transcription, is modified by three splicing receptor (SR) proteins called SRSF1, SRSF5 and SRSF6. In this process called splicing, the genetic material encoded in the RNA is basically diced or shifted around and therefore alters the resulting proteins.

The research team found that a small molecule is able to change the way one particular SR protein, SRSFI, works in the bodies of mice that gained excessive weight after being fed a high-fat diet. SRSFI determines which of the gene products of opposing effects could be produced from a single LMNA gene.

One gene product promotes fat storage, the other opposes it. This study showed that blocking SRSF1 with a compound promotes gene expression of the protein that burns calories and prevents fat gain or induces fat loss when mice are on a high-fat diet. It did not have any effect on lean mice of normal weight.

According to the research team, this approach alters the animals' metabolic rate or energy expenditure. It means that it can speed up the metabolism of obese animals, and that their bodies start to function at a higher energy level shedding the excess weight. In the process, their bodies started to burn through much more fat, as especially fatty acids serve as much-needed sources of energy.

"The results of this animal study show that this molecule can abrogate or do away with the effect of a high-fat diet," says Santo. According to Apolit, this compound did not seem to have any adverse effects, so more research in animals and eventual research in humans is needed. If the studies are positive, this may be a new way to treat obesity.

Fats That Dont Make You Fat!
There are many fats, which keep us healthy, and eaten in moderation are beneficial in weight loss programs.

Habits to Lose Belly Fat
Healthy dietary habits and regular physical activities are the best ways to balance energy intake and expenditure to get a slimmer belly.