Written by Madhumathi Palaniappan
Medically Reviewed by The Medindia Medical Review Team on November 7, 2016 at 11:09 PM 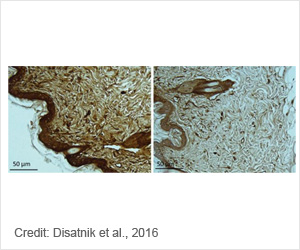 
A research team from Stanford University School of Medicine have identified new biomarkers for measuring the progression of Huntington's disease.

Huntington's disease is an inherited brain disorder which causes breakdown or degeneration of nerve cells in the brain. Symptoms of this disease usually occur in the early 30s or 40s. Huntington's disease may result in uncontrolled movements, emotional and cognitive problems.

New Insights into Huntington's Disease
Polycomb Repressive Complex 2 (PRC2) a protein complex plays a key role in the adult brain where it may contribute to Huntington's disease.
Advertisement
‘Novel biomarkers for Huntingtons disease found to help in providing new insights on disease progression and treatment options.’

The study findings was published in the Journal of Experimental Medicine this month.


Huntington's disease is characterized by the production of mutant form of huntingtin protein which aggregates and damages the nerve cells that are particularly located in the striatum and cerebral cortex of the brain.

Damage caused to the nerve cells may result in the progressive loss of voluntary and involuntary movements and may lead to psychiatric or cognitive problems. Patients usually die 10-15 years after onset of the disease.

Scientists are continuosly trying to find new pharmacological options for the treatment and prevention of the disease. Even though few drugs show hope in previous studies that were carried in animals, clinical trials in humans are still found to be time consuming due to the slow onset of the disease.

Previous studies by Daria Mochly-Rosen and her team identified a new molecule P110 that is capable of restoring mitochondrial functions and prevent neuronal death in mouse models with the disease.

Currently, scientists identify biomarkers for Huntington's disease in non-neural tissues that would help in tracking the disease progression as well as to know the disease response for P110 and other drugs.

P110 drug was found to help in restoring the normal mitochondrial DNA levels as in the case of a healthy mice.

Several other biomarkers like 8-hydroxy-deoxy-guanosine were also seen elevated in the Huntington disease mouse model. These elevated levels were also reduced by P110 treatment.

Mochly-Rosen said, "We have identified several biomarkers that correlate with disease progression and treatment in mice."

"We hope that our work will provide the basis for a larger study of patient samples that may ultimately identify biomarkers that can be used as surrogate markers to determine the benefit of therapeutic interventions in diagnosed but asymptomatic HD patients to prevent or delay disease onset." she added.

Further study is required to know whether these are reliable indicators for the treatment of Huntington's disease.

Huntington´s Disease
Huntington's disease is a genetic degenerative disorder that affects the brain and causes psychiatric, motor and cognitive dysfunction. Learn about causes, symptoms and treatment

Huntington Disease Drug Trial Confirms Safety of Creatine Levels
High dosage treatment with creatine is safe and tolerable, a new clinical trial involving the use of a drug intended to help delay the onset of Huntington disease, revealed

Indian Medical Journals The Essence of Yoga Find a Doctor How to Reduce School Bag Weight - Simple Tips Color Blindness Calculator Blood Donation - Recipients Nutam (400mg) (Piracetam) Vent Forte (Theophylline) Blood Pressure Calculator Hearing Loss Calculator
This site uses cookies to deliver our services. By using our site, you acknowledge that you have read and understand our Cookie Policy, Privacy Policy, and our Terms of Use