National Epilepsy Day 2015: Awareness Of Epilepsy Is Distant In India 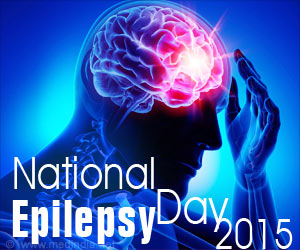 In India, National Epilepsy Day is observed annually on November 17, to create awareness about the spread of epilepsy in the country. The day was started in 1991 with the proposal of two doctors at the Indian Epilepsy Association, Eddie and Piloo Barucha.

Epilepsy is a neurological disorder that affects one in hundred people worldwide. According to the World Health Organization, Epilepsy is a chronic disorder of the brain characterized by recurrent seizures, which are brief episodes of involuntary movement that may involve a part of the body (partial) or the entire body (generalized), and are sometimes accompanied by loss of consciousness and control of bowel or bladder function.


Epilepsy may start at any age, but it often begins during childhood. In most of the cases, the reason for epilepsy is unknown. In older patients, the common causes of epilepsy are a stroke, brain injuries, brain tumor, and infections of the brain such as encephalitis, meningitis, and neurocysticercosis.


‘Epilepsy is a neurological disorder that affects about 50 million of the population worldwide. One out of every 100 to 200 people in India, suffer from epilepsy.’


The human brain is made up of billions of cells known as neurons that conduct electrical signals and communicate with each other using chemical messengers across junctions called synapses. A seizure is changes in behavior that occur after an episode of abnormal bursts of neurons resulting in the release of electrical impulses in the brain. During a seizure, a person's body shakes rapidly and uncontrollably. There are different types of seizures that can vary in frequency. Some people may have mild symptoms without shaking. Patients with epilepsy experience an odd feeling without any loss of awareness or a brief period of unresponsiveness.

Dr. Sangeeta Rawat, Senior Consultant Neurologist & Epieptologist at Global Hospital Mumbai, said, "The 1st peak is in the age group of 10 to 20 years, which is genetic epilepsy or abnormal brain tissue and the 2nd peak may occur after the age of 50 to 60 years that are symptomatic."

The three types of seizure are simple partial seizure, complex partial seizure and generalize partial seizure that can be controlled by medication. Temporary symptoms of a seizure are disturbances of movement, mood, cognitive functions and sensation including vision, taste, and hearing. People with seizures suffer from psychological conditions, such as anxiety and depression.

Globally about 50 million people have epilepsy, out of which 80 percent of the people are living in developing countries. In India, around 10 million people suffer from epilepsy. Recent studies have determined the prevalence of epilepsy in the country. The studies have found that the prevalence is about five to six per thousand and incidence around 38 to 50 per one lakh population per year. Around 70 percent of the population with epilepsy live in the villages in India. According to the statistics, there will be about 200,000 to 500,000 new cases of epilepsy every year in India. Currently, there are about 50 to 100 lakhs of epilepsy patients across the country.

Counseling should be an important component in the treatment of epilepsy. Patients with epilepsy and their families should be counseled to overcome the challenges posed by social stigma to lead a productive life.


Treatment For Patients With Epilepsy

Treatment should not be delayed for patients with epilepsy, as it can further deteriorate the condition. Most people with epilepsy will require anti-epileptic drugs. These drugs cannot cure epilepsy, however, these medications are effective in controlling seizures and keeping it under check. Some patients with epilepsy may require surgery to remove a specific area of the brain that is affected to help control seizures.

According to Dr Rawat, "Nearly 60 to 70 percent of epilepsy patients can be controlled well with drugs alone, but 20 to 30 percent may remain uncontrolled. These patients should go to comprehensive epilepsy care center for detailed evaluation by a multidisciplinary team. They should undergo pre-surgical evaluation in the form of 3TMRI, prolonged video EEG, neuropsychology testing, and psychiatrist assessment. They can undergo epilepsy surgery that can give them cure from epilepsy and also anti- epilepsy medication can be stopped after couple of years. We at Global Hospital have completed 28 successful surgeries in last 1.5 years by the comprehensive."

A dietary approach to a patient with epilepsy may be more appropriate depending on the age and the type of epilepsy. For patients with epilepsy who are resistant to anti-epilepsy drugs, a high-fat, low carbohydrate ketogenic diet can be used. A ketogenic diet reduces seizures for some people, especially children.


Tips For Patients With Epilepsy

Many people can overcome the disability of epilepsy and lead a good quality life by following some precautionary measures that can make it easier to live with the condition.
References : 1. http://www.nhp.gov.in/national-epilepsy-day_pg

Epilepsy Patients on AEDs Unaware of Fracture Risk
Anti-epileptic drugs predispose epilepsy patients to falls and fractures, but sadly, the majority of them unaware of it, say researchers from the University of Melbourne.
READ MORE