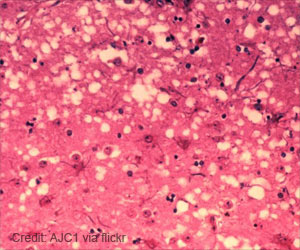 Mutant prion of sheep suffering from scrapie, lacks a stretch of amino acids that may be essential for infection in other animals.

For the first time, scientists have isolated a mutated prion protein that can multiply in the lab but not in living animals, according to a PLOS Pathogens study.

Biomarker for Creutzfeldt-Jakob Disease Identified
The first disease-specific biomarker for sporadic Creutzfeldt-Jakob disease (sCJD) has been identified by Neena Singh, MD, PhD and colleagues at Case Western Reserve University School of Medicine.
Advertisement
‘The ability of the mutant prions to self-replicate in vitro but not in vivo will help to find out the molecular mechanisms that causes prions to become deadly and cause neurodegenerative disorders.’


Prions are cellular proteins that have become mis-folded and can trigger other proteins to mis-fold, aggregate into dense protein structures, and cause brain damage.

Previous research has shown that, under certain conditions, prion strains can mutate--change their conformation.

In the new study, Vanni's team induced the emergence of a prion mutant while working with highly diluted natural prions obtained from sheep suffering from a prion disease called scrapie.

Like other prions, the mutant scrapie prion was able to multiply in the lab outside of an animal, in vitro.

However, when the researchers infected another animal, bank voles with the mutant protein, none of the voles showed signs of disease.

In contrast, the natural, un-mutated form of the prion was able to successfully infect bank voles.

The mutant prion's inability to infect bank voles may be due to its missing a stretch of amino acids that is present in the un-mutated form.

The researchers hypothesize that this region-the stretch of amino acids- is essential for animal infection, but not for in vitro multiplication.

"By investigating the in vitro evolution of prion populations derived from natural scrapie, we found that the cloud of conformational variants also includes 'defective' variants which are unable to self-sustain in vivo." the autors explain.

The ability of the mutant prions to self-replicate in vitro but not in vivo will hopefully contribute to find out the molecular mechanisms allowing misfolded prion protein conformers to become deadly prions.

Future studies could build on this finding to pinpoint key prion features that affect infectivity, improving understanding of these deadly proteins.

Role of Prion Proteins on the Neurons Identified
The prion proteins reveal that, combined with the particular receptor, they are responsible for the long-term integrity of the nerves.