Muscular Dystrophies are a group of 30-plus genetic disorders causing degeneration and progressive weakness of skeletal muscles responsible for movement. Some forms of muscular dystrophy appear in early childhood while some may not be evident until youth or middle age. The dystrophies vary in terms of age of onset, pattern of inheritance, rate of degeneration and progress of muscle weakness.


It is usually diagnosed in boys between the ages of 3-5 years and rapidly progresses. By the age of 12, most boys are unable to walk and some may need a respirator to breathe. DMD affects the respiratory and cardiac muscles and therefore chances of morbidity are high. There is currently no treatment except physical therapy, breathing therapy, corrective orthopedic surgeries and drugs like corticosteroids to slow down muscle degeneration.


‘Dystrophy Annihilation Trust, Bangalore created a memorable marathon to support Duchenne Muscular Dystrophy and raise awareness about the condition. #Run4ThoseWhoCant was an immense success with a good show of solidarity for patients and parents.’


Dystrophy Annihilation Trust, Bangalore (DART) is currently working on a novel clinical therapy known as "exon skipping" which can synthesis the short form of protein dystrophin. DART created a memorable marathon to support Duchenne Muscular Dystrophy and raise awareness about the condition.

#Run4ThoseWhoCant was an immense success with a good show of solidarity for patients and parents. The Master Muscle Marathon included a series of fun events like Zumba, music and dance, yoga sessions and an English breakfast. Master Muscle is a comic series featuring Karanveer, a young boy with Duchenne Muscular Dystrophy who ultimately morphs into the neighborhood superhero. The concept of Master Muscle comic was conceptualized by the father of Karanveer, Ravdeep Anand to create awareness among the public about muscular dystrophy.

As India is not a disabled-friendly country, there are structural barriers to getting around in any city or town. Besides such impediments there is social stigma and often such children are teased. Awareness and inclusion are clearly missing and such programs like marathons and media like comics can go a long way in educating the general public and even children on disability.

The Master Muscle Marathon was the first of its kind dedicated to Duchenne Muscular Dystrophy. It was held on 24thSeptember 2017 at the GKVK campus, Bangalore. It was primarily an event for awareness as well as fund raising for research activities.

The event was supported by Strand Life Sciences, Dhammanagi developers, Lighthouse media and other organizations like Accor hotels. The entire event was organized and handled by the DART team including chief scientific officer, Dr. Arun Sastry and other lab team like Berty Ashley, Manjula and others. The event saw nearly 700 runners including a Paralympian.

Participants had the option of either 3.5 km or 7.9 km. This corresponds to the fact that DMD occurs 1 in 3500 boys and there are a total of 79 exons which can cause DMD. Participants were encouraged to walk, run, roll and even bring pets. The run started and ended at the same point.

To encourage and motivate more people to join the run, Lighthouse media created a video featuring Karanveer and other children with DMD. The video titled "Bhaago re Jaago re" was actually written by Dr Arun Shastry and Mahesh Chaturvedi. The music was composed by Jakes Richard and sung by Guruprasad AV. The video features a young boy and other people running for the cause of DMD. The young boy is applauded at the finish line by the DART team.

The run started with light warm ups like Zumba and aerobics. The participants including around 50 expats enjoyed the session with people on the stage demonstrating Zumba and light exercises. The children and families with DMD experienced a sense of renewed hope and joy at the support evident in the huge crowd gathered. The vibrant energy was palpable in the enthusiastic run. The run culminated with great music performed by a live band Rhythmic Brass. All participants were served an English breakfast sponsored by the Accor group of hotels.

The event was significant because such events are needed for creating public awareness and support for rare diseases such as muscular dystrophy. Rare/genetic disorders are often ignored and generally people are unaware of the devastation they cause to sufferers and families.

Platforms like a marathon infusing fun with social responsibility are a great way of making people aware of such disorders and even take preventive measures. India has nearly 70 million people suffering from 1 of the 7000 rare disorders. It is time to aggressively create awareness and support for rare, genetic disorders with the mission of providing support for patients and families and future prevention. 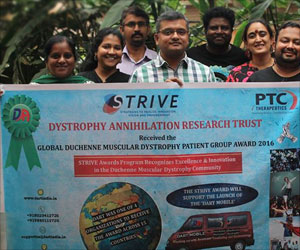 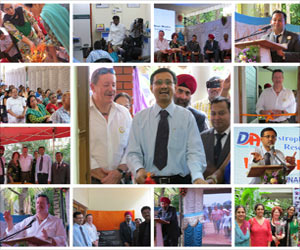