Written by Julia Samuel
Medically Reviewed by The Medindia Medical Review Team on January 11, 2017 at 3:02 PM 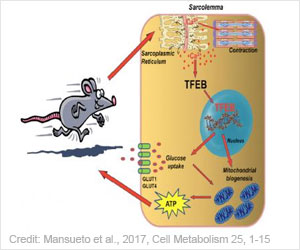 The gene TFEB is a major regulator of muscle function during exercise. Exercise triggers TFEB entering into the nucleus of muscle cells where it regulates the processes that provide energy to the muscle.

These genes include those involved in glucose use, insulin sensitivity and function of the mitochondria, the energy-producer structures inside cells. This work may lead to the design of future treatments for conditions such as diabetes, obesity and metabolic syndrome.

Exercise
It is important for us to understand the power of daily exercise. Only then can we motivate ourselves to inculcate the habit of exercise on a daily basis.
Advertisement
‘TFEB is a major regulator of glucose homeostasis and mitochondrial biogenesis to provide the energetic support to maintain muscle contraction especially during exercise.’

The signaling pathways that control the contraction-mediated beneficial effects on mitochondria and glucose/lipid homeostasis are distinct from insulin signaling and mainly rely on AMPK and PGC1£\.


In liver, TFEB regulates genes involved in lipid catabolism, fatty acid oxidation, and ketogenesis. Some of these effects are elicited by TFEB-mediated induction of PGC1£\.

Pre and Post Exercise Nutrition
Exercise is a need to eat better and perform better. Nourishing the body with wholesome food will make it grow stronger and fitter. Here's a complete guide to pre and post-exercise nutrition.
Advertisement
In a previous study, the researchers found that TFEB can regulate the response of cells to food deprivation. "In this study we found that TFEB controls the response of the body to physical exercise," said co-senior author Dr. Andrea Ballabio, professor of molecular and human genetics at Baylor and director of the Telethon Institute of Genetics and Medicine.

"TFEB plays a central role by regulating the expression of genes that allow muscle cells to use energy." TFEB is a transcription factor - a master regulator molecule inside the cell that controls the expression and function of genes.

The scientists studied the role of TFEB in the laboratory mouse. When the researchers knocked out the mouse TFEB gene, the mice had a hard time sustaining exercise.

A closer look inside the cells showed that the mitochondria looked abnormal and were dysfunctional. The cells in the exercising muscle could not generate enough energy to sustain physical activity.

In contrast, when the scientists overexpressed the TFEB gene in mice, the mitochondria looked healthy and increased the amount of energy they normally produced.

The researchers were surprised by these results. "TFEB had not been associated with how cells use energy before," Ballabio said.

"Our discovery of a central pathway that regulates muscle metabolism, use of glucose and mitochondrial function may have important implications in the study of diseases such as obesity and diabetes, as well as in a number of diseases in which muscle function is compromised."

Future studies aimed at identifying drugs that modulate this pathway may lead to the identification of new strategies to treat such diseases.

Exercise to Gain Weight
Are you underweight and want to know how to gain weight? Exercise or workouts can help you gain weight by increasing muscle mass. Read on to learn some exercises and tips to gain weight.