Living Near Green Spaces can Lower Obesity Risk in Women

Living near green spaces can help women lose weight naturally, reports a new study. The findings of the study are published in the International Journal of Hygiene and Environmental Health.

Women who live less than 300 meters from green space may be at lower risk of excess weight or obesity. This is the main finding of a study led by the Barcelona Institute for Global Health (ISGlobal), a centre supported by "la Caixa".
Living Near Green Spaces can Lower Obesity Risk in Women


‘Go green to fight obesity: Staying in and around green spaces can help you lose weight. A new study highlights that women who live near natural spaces are less likely to be overweight or obese. So, hurry up, get ready to live green every day.’
Read More..

The study participants, who ranged in age from 20 to 85 years, answered survey questions about their residential history, lifestyle (physical activity, leisure time, etc.), weight and height.

In addition, hip and waist circumference was measured and blood or saliva samples were collected. To determine whether or not participants were overweight or obese, the researchers used two markers that are commonly used in epidemiologic studies: body mass index and waist-hip ratio.

The study found a strong association between overweight or obesity in women and lack of access to urban green spaces such as parks and gardens. However, no such association was found in men.

"We do not have a clear understanding of the biological determinants behind the observed gender differences," commented ISGlobal researcher Cristina O'Callaghan-Gordo, the lead author of the study. "There are probably social factors, such as differences in how men and women use green spaces, that explain this disparity."

Using the DNA samples collected from the participants' saliva and blood, the researchers analysed the role of genetics in this association. "We studied genetic polymorphisms that have been associated with obesity in previous research," commented O'Callaghan-Gordo.

"In general, we observed a more marked reduction in risk of obesity in people with a genetic predisposition to this condition. This finding points to the existence of gene-environment interactions that could either trigger or prevent excess weight gain."

Overweight and Obesity: Catalysts of Disease

According to the World Health Organization, in 2016 more than 1.9 billion adults were overweight. Of these, more than 650 million were obese--a preventable condition. "Excess weight is an important risk factor for various non-communicable diseases, including cardiovascular, kidney and liver disease, diabetes, various musculoskeletal disorders, and some types of cancer," commented study leader Manolis Kogevinas, a researcher in the Non-communicable Diseases and Environment programme at ISGlobal. "It is also associated with increased all-cause mortality."

Natural outdoor environments, including green spaces within urban settings, promote health and well-being by increasing levels of physical activity, reducing exposure to noise and reducing psychological stress, which is an important driver of weight gain.

"This study highlights the important role played by green space in the risk of excess weight and obesity in Spanish women. Understanding the mechanisms that explain this association is crucial to plan effective and successful public health interventions," concluded Kogevinas.

Looking at Green Spaces May Reduce Your Cravings
Exposure to nearby green spaces lowers frequency and intensity of cravings such as smoking, excessive drinking, and unhealthy eating.
READ MORE 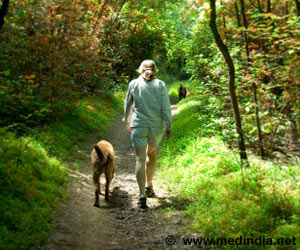 Take a 20-Minute 'Nature Pill' to Beat Stress
Are you stressed? Spending just 20 minutes in nature can help you deal with stress. So, make sure to walk or sit in a place that makes you feel in contact with nature to lower your stress hormone levels.
READ MORE

Spending Just 2 Hours a Week in Nature can Boost Your Health and Wellbeing
Relaxing in a park or spending time in nature for just two hours a week can boost your overall health and wellbeing, reveals a new study.
READ MORE