Kidney Health of Individuals With Obesity Can be Protected

Obesity leads to kidney damage or renal failure and the mechanism behind this development has been understood, reveals a new study.

The findings of this study appear in an issue of the Journal of the American Society of Nephrology (JASN). The research team points toward a possible target for protecting the health of the kidneys in individuals with obesity.
Kidney Health of Individuals With Obesity Can be Protected


The structure and function of the kidneys change due to obesity, and this explains why people with obesity are at greater risk of developing chronic kidney disease, and its progression leads to renal failure.


Multiple metabolic factors contributing to obesity-induced kidney problems have been suggested. But the underlying mechanisms behind the development of renal failure are not completely understood.

The study was lead by Joseph Tam, DMD, Ph.D., and Ph.D. student Shiran Udi, MSc from the Institute for Drug Research, The Hebrew University of Jerusalem, Israel.

The research team investigated the kidney cells, which are responsible for the reabsorption of nutrients and allowing other substances that have no nutritional value to be excreted in the urine.

These renal proximal tubular cells (RPTCs) are particularly susceptible to the accumulation of lipids (fat), an effect known as lipotoxicity.

Development of Renal Injury can be Reduced

The role of endocannabinoids, lipid molecules, which act on a particular cellular receptor (CB1R) in RPTC lipotoxicity has been reviewed by the research team.

The mice experienced less obesity-induced lipid accumulation in the kidney, less kidney dysfunction, injury, inflammation, and scarring, especially in those that lacked expression of the receptor in RPTCs.

The molecular signaling pathway revealed by the research team was involved in mediating the CB1R-induced kidney injury and lipotoxicity in RPTCs.

These deleterious effects have been linked to decreased activation of liver kinase B1, the energy sensor AMP-activated protein kinase, and reduced fatty acid β-oxidation, reveals the research team.

Dr. Tam said, "This work provides a novel approach to slow the development of renal injury through chronic blockade of peripheral CB1Rs."

"And, it also supports strategies aimed at reducing the activity of the endocannabinoid system, specifically in the kidney, to attenuate the development of RPTC dysfunction in obesity," explained Dr. Tam.

Link Between Obesity and Kidney Damage

Obesity is a global epidemic that affects more than 600 million people worldwide. It affects multiple body systems and predisposes to various health problems. People who are overweight or obese are at a two-to-seven times increased risk of suffering from end-stage kidney disease.

Hence, it is important to prevent obesity to avoid kidney disease. Preventive measures should be adopted early in life, as it may not always be easy to reduce weight quickly.

Pyelonephritis
Pyelonephritis is a urinary tract infection of one or both the kidneys. The patient usually has fever, pain in the back and flanks and painful urination.
READ MORE 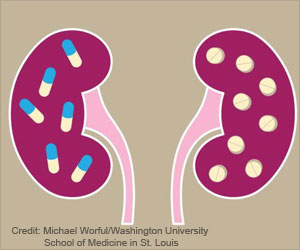