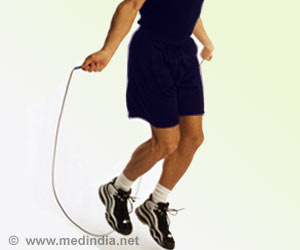 Feeling hungry? Try jumping rope. This is what a new study from Japan suggests.

Many of us have experienced that exercising, rather, a vigorous workout preferably in the morning, can help suppress appetite, at least for a short period. Studies have shown that brisk exercising affects the release of key appetite hormones, the most important being ghrelin.

Ghrelin is a hormone that increases hunger. Secreted primarily in the lining of the stomach and some cells in the pancreas, ghrelin travels to the brain where it turns on the hunger cell and turns off the satiety cell. This means, ghrelin levels increase before meals and decrease after meals. So lesser the ghrelin levels, more the appetite suppression. This hormone is the counterpart of the hormone leptin that is produced in fat cells and which induces satiety when present in high levels.


Normally after you eat, a peptide YY is released from the small intestine. The peptide circulates in the blood and binds to receptors in the brain. These receptors then cause a decreased appetite and make you feel full after the meal by slowing down the movement of food through digestive tract. Thus more the peptide YY levels, more appetite suppression.

Now, exercising can also produce the same effects. A study has shown that aerobic exercises cause ghrelin levels to drop and peptide YY levels to increase, thus suppressing appetite.

So, researchers, Hiroshi Kawano and colleagues from Faculty of Sport Sciences, Waseda University, Japan, set out to determine the effect of different modes of exercise on appetite and appetite-regulating hormones. The study has been published in the journal Appetite.

 ergonomic cycling 3 sets × 10 minutes with 5-minute interval, then rested for 120 minutes and

'These results indicate that weight-bearing exercise (skipping in this case because the muscles and joints bear repeated impact from hitting the ground) has a greater exercise-induced appetite suppressive effect compared with non-weight-bearing exercise (cycling), and both forms of exercise lowered ghrelin and increased total PYY, but the changes did not differ significantly between exercise modes', they stated.

The researchers thus hypothesized that rapid up-and-down movement involved in the skipping causes gut disturbance and most probably this interferes with the release of hormones that govern appetite.

'It is known that immediately after running for 60 minutes, there is reduced appetite and reduced levels of ghrelin, the hormone that stimulates appetite. In my own research, I have shown how appetite falls even after just 30 minutes of jump rope exercise. All this data is biochemical verification of the loss of appetite that everyone feels just after exercising. Furthermore, this reduced appetite continues for about an hour after exercise. So when you feel like having a mid-afternoon snack, why not try doing just a few minutes exercise instead, such as jumping up and down or climbing up and down the stairs? That's all it takes to lower your appetite, and I expect you will have the added dieting effect of having consumed some energy', says Hiroshi Kawano.

Good logic. Why not put it to test?

The Basis of Density Training
The concept of density training lies in adding more muscles to the body frame more quickly. In the process there is fatloss.
READ MORE

Stick To Your Diet And Exercise Schedule
Choose an exercise and diet schedule that suits your lifestyle and one you can maintain throughout your life.
READ MORE

Curb Hunger Pangs With Almonds and Wheat Flour
Want to know the trick to control hunger pangs? Here is the clue.
READ MORE

Exercise and FitnessHungry? - But you Just Ate!Why does your Stomach Growl with HungerFullness Factor, Satiety Index and Glycemic Index for Weight Watchers