In Europe, one in five women around the age of 20 suffers from iron deficiency. Typical symptoms include diminished work performance, fatigue, anemia and headaches.
Iron-Coated Whey Protein, The New Formula For Iron Fortification


Incorporating iron-rich foods and using supplements can help boost iron levels but it is tricky, as the iron must be in a form that the body is able to absorb successfully. Iron is also a trace element that can alter the colour, taste and smell of the food it is added to, making it far less appetising.


‘Protein nanofibrils from whey protein with iron nanoparticles can be incorporated into foods. They are stable, easily absorb-able and prove to reduce iron deficiency.’

The two ETH professors Raffaele Mezzenga and Michael B. Zimmermann from the Department of Health Sciences and Technology have discovered a new way of fortifying food and drinks with iron: with a hybrid material made of edible whey protein nanofibrils and iron nanoparticles.

The nanoparticles immediately bound to the protein nanofibrils surface and were effectively stabilised. This is a key trick, as normally iron nanoparticles are not stable: they tend to quickly clump together and form aggregates that cannot be easily mixed into foods or drinks.

Scientists administered the new iron compound to rats with iron deficiency after being fed a low-iron diet. The new preparation cured the animals' iron deficiency and the associated anemia just as effectively as iron sulphate (FeSO4), the most commonly-used iron supplement used in humans; FeSO4, however, often causes undesirable sensory changes in foods.

The new supplement was also easily digested. As the authors showed in an ad-hoc in-vitro experiment, the enzymes in the rats' stomachs entirely digested the whey protein nanofibrils. In addition, acid conditions like in the stomach dissolved the iron nanoparticles into iron ions, which can then be quickly absorbed into the blood and used to produce new red blood cells.

The iron-coated whey protein nanofibrils can be administered either in powder or liquid form, and the new compound can be easily added to different types of food without affecting their taste or smell or color.

No Reported Side effects

The researchers ran microscopic tests on the rats' brain, heart, kidney and other organs, after they had eaten the nanofibrils for 2 weeks to identify potential risks and side-effects. They were particularly interested in the whey protein nanofibrils, which have never been used in foods or food supplements before.

From a structural point of view, these structures are similar to amyloid fibrils, which accumulate in the brain and have been linked to Alzheimer's disease, but differently from them, in the present case are made out of hydrolysed edible food proteins.

The ETH researchers therefore wanted to make sure that eventually undigested protein fibres in their iron supplement do not accumulate in the body and potentially produce tissue anomalies.

"On examining the organs and tissues of the rats, we did not find any evidence of nanoparticles or nanofibrils accumulating or possibly causing organ changes", says Mezzenga.

One thing he can be sure of: "Our new iron supplement has enormous potential for successfully combating iron deficiency in an economic and efficient way".

The ingredients used to make this innovative food supplement are cheap and in plentiful supply. Whey proteins are a side-product of the dairy industry. Iron salts are also cheap and readily available.

As both the process and the ingredients are easy to work with, this iron food supplement would also be a good alternative for people living in poor countries who are more prone to iron deficiency than those living in western industrialised nations.

The researchers have filed a patent for their new product and look forward discussing with commercial partners to develop the technology further. 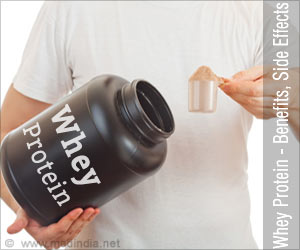